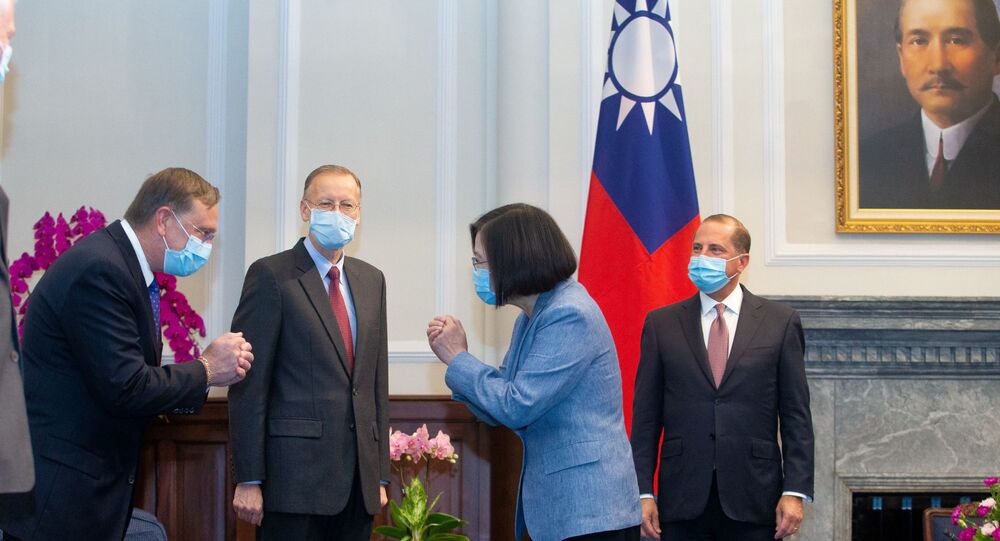 Azar arrived in Taiwan on Sunday for the first highest-level visit by a US cabinet official since 1979, when Washington switched its official recognition to the People’s Republic of China.

"Thank you, President Tsai, for welcoming me to Taiwan today. It is a true honor to be here to convey a message of strong support and friendship from the United States to #Taiwan," he wrote on Twitter.

During the meeting, Azar congratulated Tsai on beginning her second term earlier this year.

"Under President Trump, the United Sates has expressed our admiration for Taiwan’s democratic success in tangible ways," he noted, as broadcast by the Taiwanese administration.

The health secretary went on to commend Taiwan’s successful fight against COVID-19, calling it "a tribute to the open, transparent, democratic nature" of its society and culture.

“China firmly opposes any official interactions between the US and Taiwan. This position is consistent and clear. China has made stern representations with the US side both in Beijing and in Washington.” Wang said during a regular press briefing on Wednesday.

However, Azar stressed that his visit would be focused on cooperation in global health.

“Taiwan has been a model of transparency and cooperation in global health during the COVID-19 pandemic and long before it. I look forward to conveying President Trump’s support for Taiwan’s global health leadership and underscoring our shared belief that free and democratic societies are the best model for protecting and promoting health. This trip represents an opportunity to strengthen our economic and public health cooperation with Taiwan, especially as the United States and other countries work to strengthen and diversify our sources for crucial medical products,” he said in the statement released by the US Department of Health and Human Services.

Beijing does not recognize Taiwanese independence, viewing the island as a part of China. Taipei similarly does not recognize the central government in Beijing. The Chinese Foreign Ministry earlier made a representation to the US in connection with Azar’s visit.

The United States, along with many other countries, does not recognize Taiwan as a sovereign nation and officially sticks to the "One China" policy. Nevertheless, Washington has kept informal relations with the island nation after severing diplomatic ties with it in 1979.