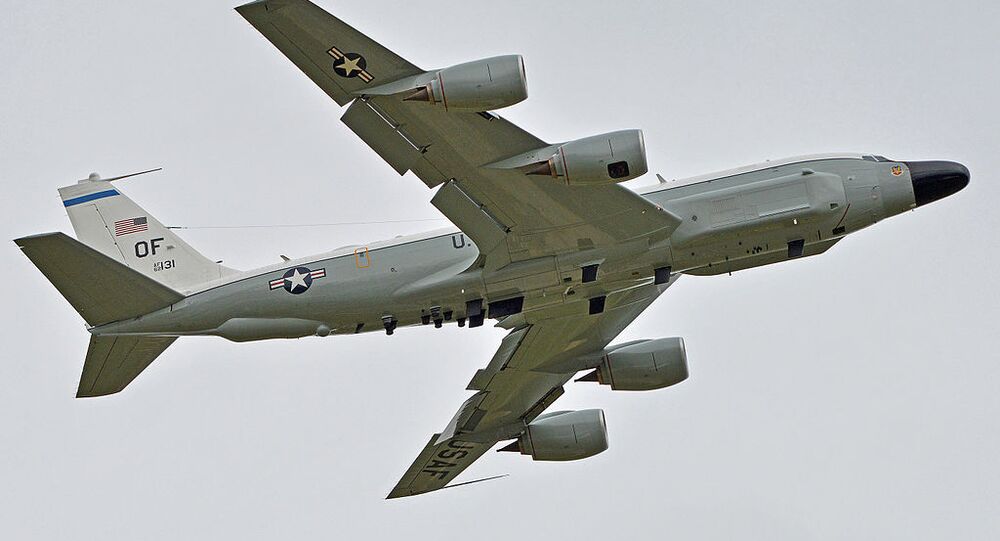 According to a new report by a Chinese think tank, the US military flew 67 reconnaissance aircraft missions over the South China Sea in July - a marked increase over previous months. Theories as to why include COVID-19 paralyzing naval missions or an attempt to send a message to Beijing.

“The real number is larger, given that there might be inevitable omissions in the process of data collection and analysis. Meanwhile, small reconnaissance aircraft are not included, and not all military aircraft have their ADS-B transponders switched on all the time,” SCSPI wrote, noting that the activities of carrier-based reconnaissance aircraft also remained outside the scope of its findings.

Among the bevy of spy planes used by the US to vacuum up electronic and signals intelligence across the region are the US Navy’s P-8A Poseidon, the P-3C Orion, the EP-3E Airborne Reconnaissance Integrated Electronic System II (ARIES II) and MQ-4C Triton drone, and the US Air Force’s (USAF) RC-135 Rivet Joint, the E-8C Joint Surveillance Target Attack Radar System (STARS) and E-3 Sentry.

SCSPI noted a particularly pronounced increase in P-8A Poseidon missions. The modified Boeing 737s are used for hunting and killing surface warships as well as submarines, and SCSPI noted in a previous report that some of the behaviors of patrol craft like the Poseidon and the older P-3C Orion seemed to indicate an interest in tracking Chinese submarines off the coast of Guangdong Province.

Sputnik also reported that a Poseidon was forced to make an emergency landing on Okinawa, Japan, last week, thanks to an engine problem that could have been caused by overuse.

The inclusion of E-8 Joint STARS aircraft is also notable, SCSPI said. The airliner-sized jets aren’t just reconnaissance aircraft; they’re also command and control centers, functioning as the “nerve center” of air and ground operations during a conflict. This, the think tank said, “represents an upgrade of battlefield construction and a substantive electronic confrontation.”

“The participation of all kinds of battle surveillance and control aircraft of the USAF indicates the US military’s stepping up efforts in battlefield construction that the reconnaissance has diverted from ‘defensive’ into ‘adversarial,’” SCSPI added.

According to the report, nine of the 67 flights closed to within 70 nautical miles of the baseline of China’s territorial sea, with six of the flights passing within 60 nautical miles. The closest, on July 26, was just 41 nautical miles away - the closest a US plane has come in decades.

In May, the US flew just 35 recon flights through the region, and in June, 49 flights. SCSPI noted that in addition to the number of missions, in July these aircraft also began operating at atypical overnight hours between 8 p.m. and 6 a.m. local time.

Such Flights ‘Not Necessary,’ Given US Abilities

SCSPI Director Hu Bo told the Global Times in a Sunday interview that "the reason behind the significantly increased US aerial reconnaissance in 2020 could be related to the COVID-19 outbreak. Since many US warships suffered from group infection events which resulted in a lack of warships, the US might have opted to enhance aviation reconnaissance."

It is also notable that the step-up in recon flights has coincided with the US State Department’s solidification of its position on China’s South China Sea claims, as well as the attacks on TikTok, Huawei and the Chinese consulate in Houston, Texas, plus myriad other instances. At each turn, the US has claimed China is overstepping its bounds and that it’s Washington’s job to put the Chinese back in line.

In Washington parlance, this makes China a “revisionist” power, for seeking to upend the Western-centered world order by advancing technologically and economically so as to no longer be forced to accept an inferior position to Western powers, as it has been since its 1842 defeat in the First Opium War. In 1949, Mao Zedong said China had “stood up,” ending that “century of humiliation,” but even now, the Chinese Communist Party leadership doesn’t envision the country completely closing that gap with the West before 2049.

An Election-Saving War Over a Shoal?

On Tuesday, the South China Morning Post (SCMP) reported that retired Chinese naval officer and noted naval expert Wang Yunfei warned that US President Donald Trump, looking to boost his flagging approval rating, might seek to start a “controllable” conflict with China over Scarborough Shoal, an island in the eastern South China Sea that is claimed by both China and the Philippines, a US ally.

“There are no troops stationed there, so the consequence of a diplomatic conflict is relatively smaller,” Wang wrote in a Chinese military column, the SCMP reported. “The American military might also try to humiliate the Chinese in the name of a resumption of their shooting training.”

However, the SCMP noted Manila was unlikely to go along with such a plan, making it implausible that Trump would risk further alienating a key regional ally. “To throw some bombs into an empty lagoon makes no military sense, and it would also upset the Philippines and even other countries in the region,” SCSPI Director Hu told the outlet.

While Philippine President Rodrigo Duterte has pulled the country’s navy out of regional military drills with the US and several other countries, he has also pushed for a renegotiation of the 1951 defensive pact with the US that would push its defensible territory westward, into the South China Sea. As Sputnik reported, those western islands were not part of the Philippines when it was a US colony between 1898 and 1946, which is why they are not included in the agreement.

However, as Duterte’s own nationalist politics bounce between courting Beijing and Washington, he has also considered abrogating a key part of that defensive treaty: in February, he threatened to end the Visiting Forces Agreement that allows US forces to be based and to drill in Philippine territory. In June Duterte postponed its ending, which Philippine Ambassador to Washington Jose Manuel Romualdez told the Associated Press was at least in part motivated by the pressures of the COVID-19 pandemic.

Zhang Mingliang, a specialist in South China Sea studies at Jinan University in Guangzhou, told the SCMP that regional nations were “being extremely careful with their words and actions, so as not to explicitly choose a side” while China is under such exceptional pressure from the United States, which might also explain why such a war is unlikely at the moment.