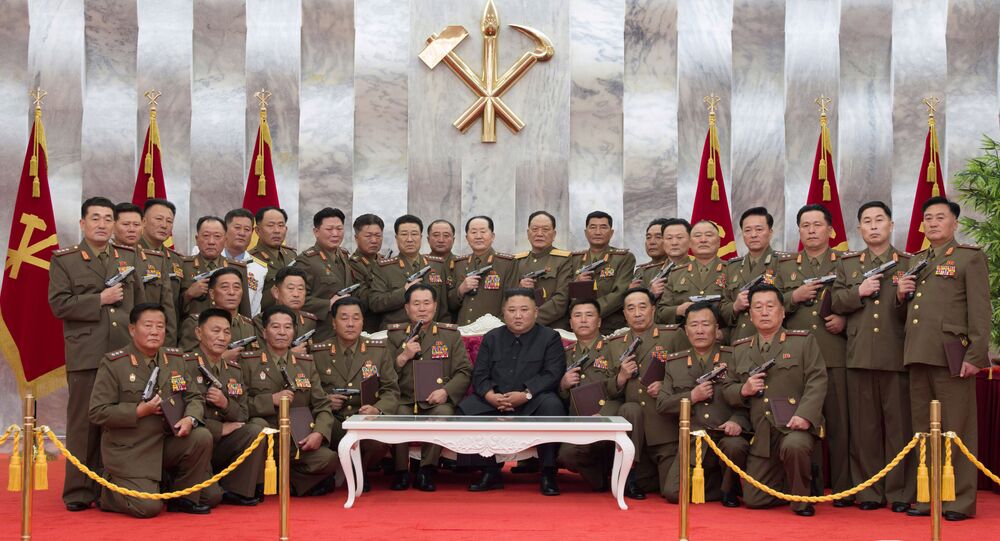 The past six months have seen just occasional appearances by Kim Jong-un in public, amid reports about the North Korean leader’s poor health and even death after he skipped a number of important gatherings in the country in April.

North Korean leader Kim Jong-un has presented generals in the country's army with commemorative pistols as part of events to mark the 67th anniversary of the signing of the armistice that ended the Korean War (1950-53), the DPRK's KSNA news agency reports.

In the pictures released by KSNA earlier on Monday, Kim is seen surrounded by generals and senior officers, including chief of the general staff Vice Marshal Pak Jong-chon, who carefully pointed the pistols upwards, not towards the North Korean leader.

The award ceremony took place at the headquarters of the ruling North Korean Workers' Party's Central Committee on Sunday.

© REUTERS / KCNA
North Korean leader Kim Jong Un poses for a photograph after conferring "Paektusan" commemorative pistols to leading commanding officers of the armed forces on the 67th anniversary of the "Day of Victory in the Great Fatherland Liberation War", which marks the signing of the Korean War armistice, in this undated photo released on July 27, 2020 by North Korean Central News Agency (KCNA) in Pyongyang

The newly developed small arms were named after Mount Paektu, a dormant volcano near the Chinese-Korean border that is considered the sacred birthplace of the Korean people.

The generals were seen standing close to each other and in close proximity to Kim despite Pyongyang announcing the North's first suspected COVID-19 case on Saturday after a person who defected to South Korea several years ago reportedly returned via the demarcation line with coronavirus symptoms earlier last week.

South Korea's Central Disaster and Safety Countermeasures Headquarters claimed that the person is not infected with the virus. The South has over 14,000 confirmed coronavirus cases and its COVID-19 death toll stands at nearly 300, according to data from Johns Hopkins University.

The Sunday ceremony was one of the few public appearances made by Kim in the past six months amid speculation of his poor health and even death following the North Korean leader skipping an array of major events in April.

Seoul said at the time that there was no evidence to confirm media reports about the DPRK leader allegedly undergoing heart surgery, and that Kim was "alive and well".

As far as the Korean Armistice Agreement is concerned, it was inked on 27 July 1953 in a bid to "ensure a complete cessation of hostilities and of all acts of armed force in Korea until a final peaceful settlement is achieved". Given that a bilateral peace treaty has never seen the light of day, the two sides technically remain at war.