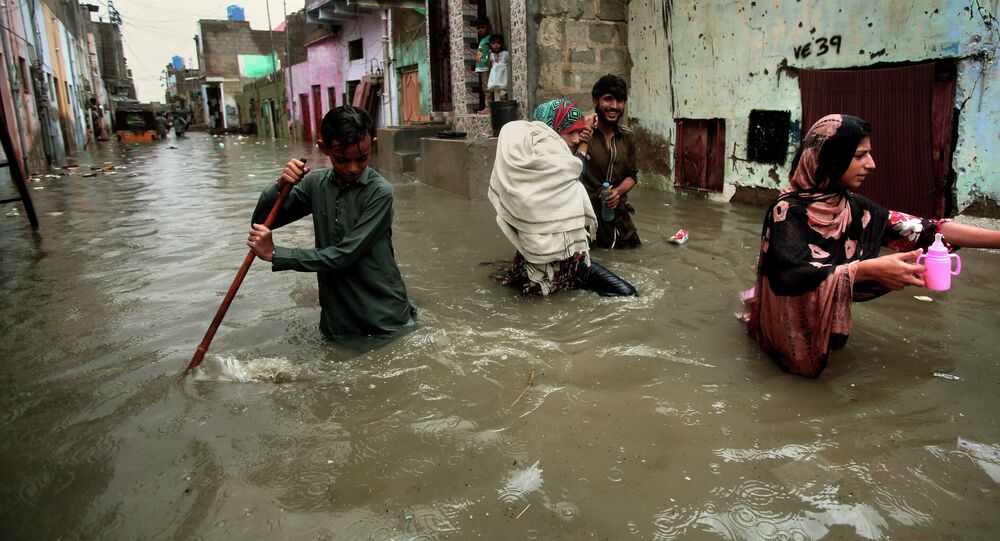 Five people died, three due to electrocution, as heavy rain wreaked havoc in Karachi. The rain, which was a relief after a rather long dry spell, soon turned into a nightmare for the city's residents on Sunday.

From cars floating in sewage-mixed water, roads and highways submerged in rain water, overflowing gutters, urban flooding, the deplorable condition of roads, and people trying to remove the drowned bodies not only revealed the ill-maintained civic infrastructure in the country’s largest city, but the apathy of the authorities.

Goddd! This is Karachi, after it rained for 30 mins. ONLY! 😳@BBhuttoZardari - Wearing "Ajrak Mask" is NOT sufficient to show that you care for Sindh! Karachi needs SERIOUS attention! This is unbelievable! :/ pic.twitter.com/jC8wFD0Qmy

Why do people complain Karachi has no entertainment? Here’s an amazing drive-through water park. Thank you PPP and MQM pic.twitter.com/kEFRkKSair

2 hours rain has drowned entire city of Karachi.. with heavy rains, water ponds are normal anywhere, but they disappear within hours but in Karachi it stays for week, brings destruction. 1/3 pic.twitter.com/48mpQ0Zv7a

This is not Venice, this is Karachi in Monsoon 2020. This situation can be easily managed if PPP govt that has authority over Sindh Solid Waste Management, cleans the nullahs ahead of moonsoon so sewage system isn’t choked. Yet they never do that.
#بلاول_زرداری_سندھ_کی_بدحالی pic.twitter.com/pTGMbmHPdS

​Like every year, life in the city crumbled under the monsoon.

The city's resident shared on Twitter how the city sinks every year and nothing has been done to improve the situation. The PPP (Pakistan Peoples Party) government, which has been governing the city for the past eight years, has come under harsh criticism.

Karachi drowned yesterday due to rain, but PPP was busy celebrating Asif Zardari’s birthday. We are surprised there is still debate about PPP being a viable option for Pakistan. They have been governing Sindh for more than a decade straight now and stand totally exposed now. pic.twitter.com/hFOIaf1kWB

​Karachi, which is Pakistan’s commercial hub and contributes more than 20% of the national output, has dropped 12 places in the Mercer’s Quality of Living Survey, where it is at 202nd out of 230 cities.