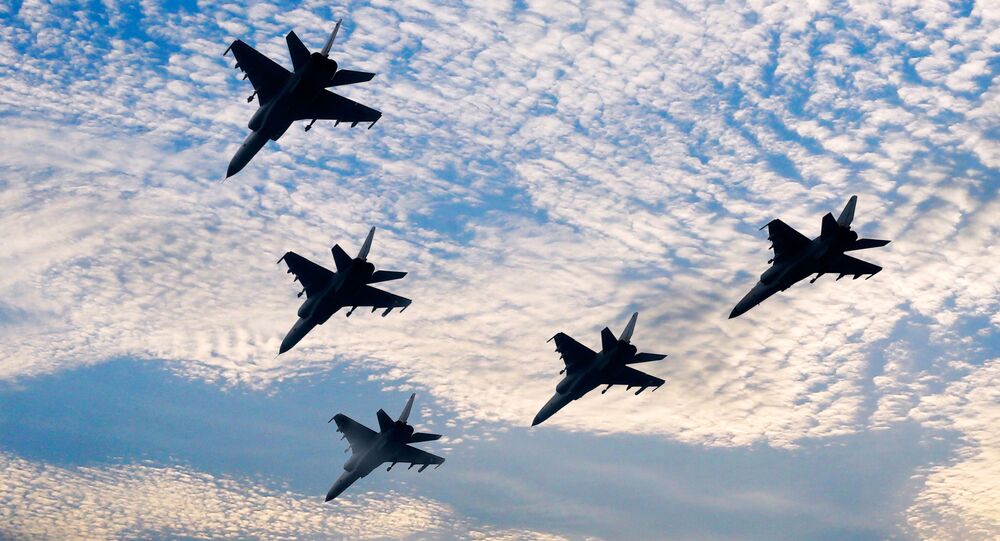 For weeks, several US aircraft carriers have carried out drills in waters near China, including in the Philippine Sea and South China Sea. However, last week, Chinese forces decided to stage their own drills, holding live-fire exercises in which PLAAF jets rehearsed how they would carry out strikes against enemy warships in the region.

The drills involved JH-7A and J-16B naval strike aircraft, which fired more than 3,000 missiles total, the Global Times reported, citing China National Radio. They were held on July 15 and 16.

In addition to flight ops by the US Navy carrier USS Nimitz and USS Ronald Reagan, the destroyer USS Ralph Johnson carried out a still-more-provocative act on July 14, the day before the Chinese drills began: a so-called “freedom of navigation operation” (FONOP). The warship sailed inside the waters surrounding the Spratly Islands, which are claimed by China as part of its territory, in a deliberate attempt to flout Chinese claims.

“These incidents, taking place thousands of miles away from the US and on China's doorstep, have again proven that the US is the real pusher of militarization in the South China Sea, and China is forced to take countermeasures to safeguard its national sovereignty and territorial integrity,” Global Times wrote, citing an unnamed Chinese military expert.

Hong Kong-based military commentator Song Zhongping told the Post on Tuesday that “large-scale naval drills in the South China Sea … will become a regular activity as tensions escalate between China and the US.”

The JH-7A is a totally home-grown aircraft, built by Xi’an Aircraft Industry Corporation as a long-range supersonic strike aircraft roughly analogous to the United States’ F-111 Aardvark. The J-16B is a modification of Shenyang’s J-11 air superiority fighter intended to partially replace the JH-7A, which is incapable of defending itself from interceptors. The J-11 was, in turn, based on the airframe of Russia’s Sukhoi Su-27.

Both the JH-7A and J-16B can carry a wide array of long-range anti-ship missiles, including the KD-88 and YJ-83 missiles, as well as anti-radiation missiles like the LD-10 and YJ-91. As Sputnik reported, a common tactic used by Chinese aircraft involves turning on a jamming pod and then targeting the enemy warship after it turns up its radar’s power to try and cut through the jamming - a combination of Suppression of Enemy Air Defenses (SEAD) and traditional maritime strike that helps maximize the effectiveness of a long-range attack.

Russian Ministry of Defense
A PLAAF JH-7 aircraft, presumed to be the reported JH-7AII variant, in early August during the Aviadarts 2019 competition of the IAG held in Russia

Analysts have noted the vastly superior capabilities of Chinese naval forces, including their wide array of ultra-long-range anti-ship missiles. One August 2019 report by the University of Sydney warned that Chinese missiles could cripple American forward areas just hours after shooting begins; another by the Hudson Institute in November warned that Chinese missiles have longer ranges than US Navy ship radars do, meaning the vessels wouldn’t even know a threat was coming before the missiles were already in the air.

Hudson’s report, which was titled, “If You Can’t See ’em, You Can’t Shoot ’em,” warned that “in the worst case, America’s adversaries may outpace the US in a conflict’s opening phases, forcing Washington to decide between accepting high casualties or ceding an operational region.”

“Less catastrophically, if the US lacks information on China’s movements in the Pacific, this can allow Beijing to manipulate the time and place of potential confrontations, forcing US commanders to choose between unsavory escalation scenarios,” the institute wrote.

Earlier this month, the US State Department issued its first formal repudiation of Chinese claims in the South China Sea, saying that the vast majority of the waterway is international waters and not Chinese waters. China’s claims are contested by five other regional nations, all of which also claim some of the same waters, as the waterways are prime fishing grounds and also believed to harbor large hydrocarbon reserves underneath the seafloor.