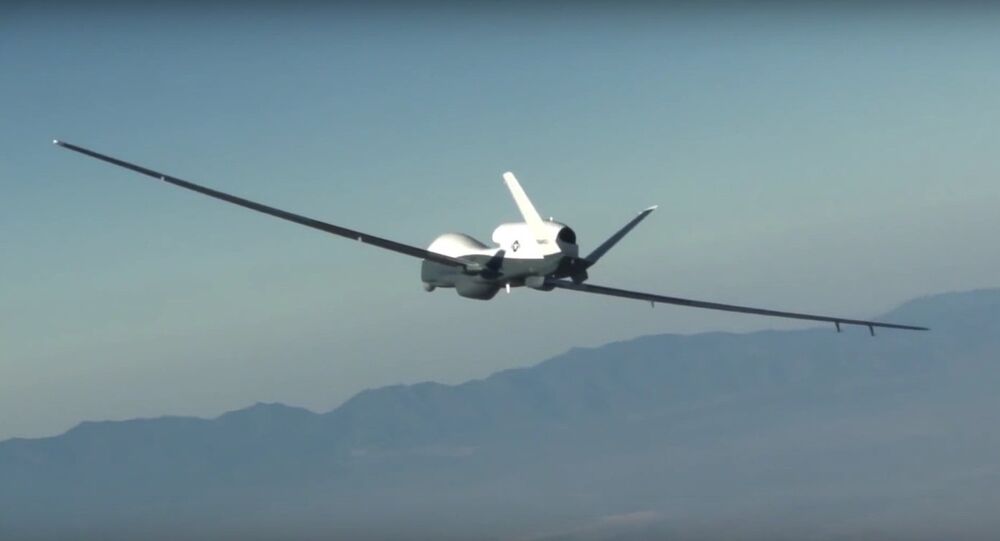 One of the US Navy’s MQ-4C Triton high altitude long endurance (HALE) reconnaissance drones was spotted entering the South China Sea on Wednesday - the latest addition to an increasingly long list of US spy planes plying the waterway in recent months.

The unmanned aerial vehicle was spotted entering the northern end of the South China Sea via the Bashi Channel on Wednesday, where it seemed to zero-in on some object of interest before departing the region.

Rare to find an unmanned aerial vehicle in the #SouthChinaSea.
On July 15, US Navy MQ-4C Triton, a high-altitude long endurance UAV, was spotted patrolling to the southeast of Taiwan. pic.twitter.com/KjMgKnkuNl

​Sputnik reported in January on the stationing of the US Navy’s first two MQ-4C Tritons on Guam, at the far side of the Philippine Sea from the Bashi Channel, noting at the time that the aircraft’s wide radius of operations would allow it to enter parts of the strategic waterway where Washington disputes many of China’s claims of sovereignty.

While one day the US Navy hopes to use Tritons, which it specially adapted from the Air Force’s RQ-4 Global Hawk for nautical surveillance, to patrol the entire western Pacific region, for now appearances of the Tritons remain relatively rare. Their deployment to Guam represents the achievement of early operational capability (EOC) for the unmanned aircraft, which will only see more regular use once testers are satisfied they’ve ironed out many of the system’s remaining bugs. According to The Diplomat, that could be achieved sometime next year.

The Triton is reportedly capable of staying aloft for more than 24 hours at a time and can soar at altitudes up to 10 miles, or 53,000 feet. It is unarmed.

However, the Navy and Air Force have a bevy of surveillance aircraft in the region, which have recently been flying daily patrols across the South China Sea, East China Sea and Philippine Sea.

The day prior, an E-8C Joint STARS aircraft, a massive electronic intelligence, surveillance and command and control platform modified from a Boeing 707 airliner, was spotted patrolling the waters off Guangdong Province, near Hong Kong.

JUST IN: USAF E-8C Joint STARS, an airborne battle management and command & control platform that conducts ground surveillance, is spotted heading to Guangdong, a second time in the past 3 days, July 15. pic.twitter.com/3nsQjhDl4d

​According to the South China Sea Probing Initiative, a think tank associated with Peking University, it was the second time in three days the aircraft was spotted. On July 13, the plane was seen alongside an RC-135W Rivet Joint electronic intelligence aircraft and an E-8A Poseidon maritime patrol aircraft. All aircraft patrolled the same waterway between the Pearl River Delta and the Bashi Channel.

Why US spy planes are so obsessed with this area of the South China Sea, which contains almost none of the waterway’s disputed islands, remains unknown, but some experts have floated the idea the Pentagon is honing its ability to detect Chinese submarines.

“The deployment of surveillance aircraft such as the MQ-4C, P-8A and P-3C [Orion maritime patrol and anti-submarine warfare aircraft] could help the US Navy to reconnoitre warship, submarine and other underwater activities in the region as they are able to detect sound pulses and track submarines,” Song Zhongping, a Hong Kong-based military expert, told the South China Morning Post on Thursday.

At the same time nearby, Taiwan’s military carried out its annual Hanguang live-fire military exercises, which involved the firing off of Patriot PAC-3 anti-air missiles. The drill simulates Chinese air raids across the island, which has defended its autonomy from Beijing since 1949.