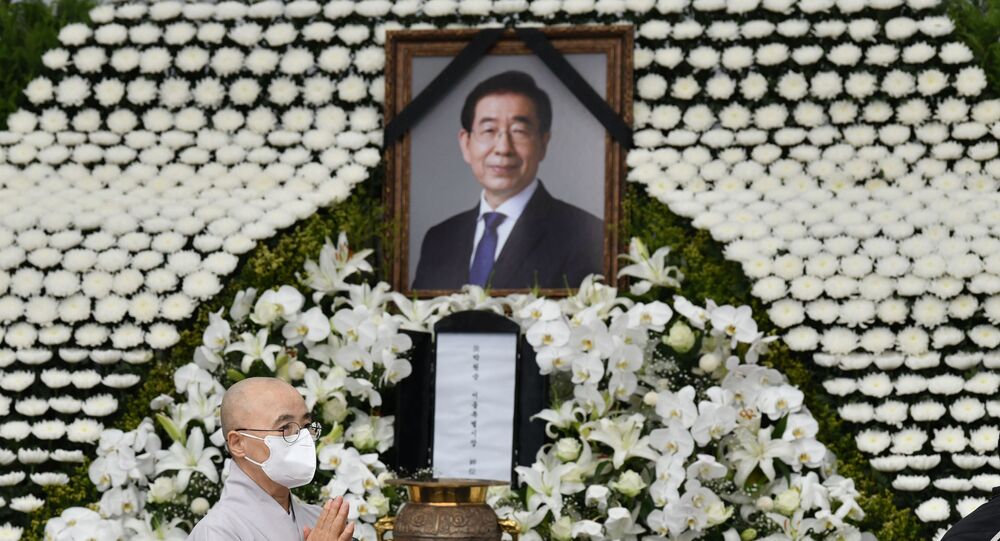 SEOUL (Sputnik) - The authorities of Seoul on Wednesday announced the intention to probe the sexual harassment claim that was filed against former city Mayor Park Won-soon a day before his death.

"Seoul will conduct a rigorous investigation to find out the truth by creating a joint investigative committee involving external experts such as women's human rights groups, human rights experts, and legal experts. By forming and managing the committee, the city guarantees the justice and objectivity of the investigation", Seoul municipal spokesman Hwang In-sik told reporters.

Yonhap cited sources as saying that Park's former assistant filed a criminal complaint on 8 July, accusing him of sexual harassment and "inappropriate" phone messages. In accordance with South Korean law, the proceedings over these allegations were automatically suspended after the mayor’s death.

The fact that the mayor's funeral was held with all of the honours attached to a person in such a position caused public discontent as some citizens have criticised the termination of the investigation on charges of sexual harassment brought against the official.

Park was found dead in the woods of Mount Bugak not far from his residence on 9 July after an hours-long search involving hundreds of police officers, dogs and drones. The 64-year-old official's daughter reported him missing four to five hours after he left home. She said he left her a "will-like" verbal message. According to South Korea's Yonhap news agency, the mayor is presumed to have committed suicide as he left a note in his residence where he said that he was "sorry" to everyone, specifically for "causing only pain" to his family and asked to be cremated.