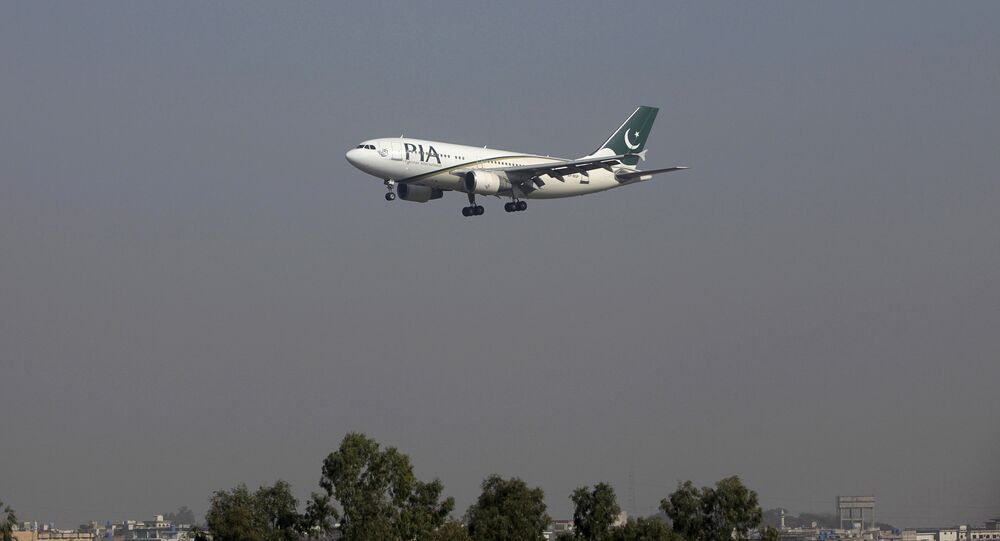 New Delhi (Sputnik): On 22 May, an airplane crash in Karachi killed 97 of the 99 people onboard. It was stated in the provisional inquiry report that the pilot and the air controller were responsible for the incident. In June, Pakistan International Airlines grounded 150 pilots over holding fake licenses.

"The PIA will not be able to operate its flights to the United States", said the authority in a statement while banning "all types of flights" operated by PIA. Pakistan news website Geo News has stated that a PIA spokesperson confirmed the ban and said that the national carrier had received an email in this regard.
© REUTERS / AKHTAR SOOMRO
What is Known About the A320 Plane Crash in Pakistan So Far

"We will address America's concerns", the spokesperson said, indicating that the matter of pilots' licenses will be resolved through ongoing corrective measures within the airline.

Over similar concerns, Pakistan’s flagship carrier's permit has been suspended by the European Union Aviation Safety Agency (EASA) for six months, while the UK has barred PIA flights from three of its airports.

Vietnam has grounded all Pakistani pilots working in the country and Malaysia also announced a temporary suspension of pilots holding Pakistani licenses and employed by its domestic airlines.

Meanwhile, the UAE is seeking verification of the licenses granted to Pakistani staff working at its airports.

In June, the Pakistani Aviation Ministry told parliament that a large number of commercial pilots were holding fake licenses or cheated in exams, resulting in the grounding of around 150 pilots.

The inquiry into an airplane crash on 22 May in Karachi, which killed 97 of 99 on board the craft, revealed the poor state of affairs in the country’s national carrier. Investigations into fake licenses have been underway since 2018, but the major crash expedited the probes.