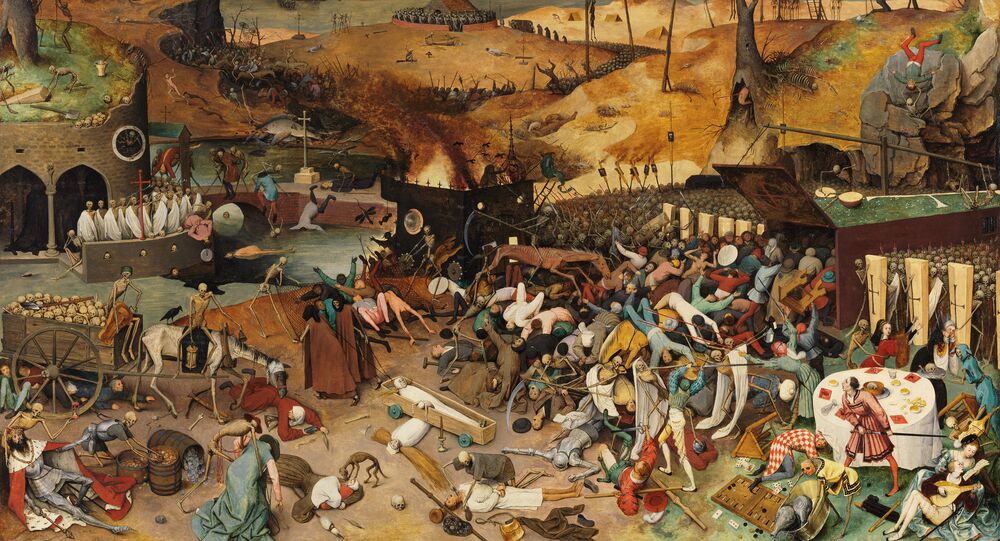 Fears Over Second 'Panda Pandemic' Grow But Should You Worry About China's Bubonic Plague Cases?

The new cases of one of the world's deadliest pandemic has rattled social media and raised concerns of authorities, but according to data, modern cases are rather common and have been reported across the world, it has been revealed.

Concerns over a fresh pandemic have surfaced after a 15-year-old resident in China's Inner Mongolia was hospitalised on Sunday for contracting the bubonic plague after consuming marmot meat.

China has issued a Level 3 alert across the region, the second-lowest on a four-tier system, and alerted residents to report suspected cases.

​The disease comes as governments have begun easing COVID-19 lockdown restrictions, which first erupted in Wuhan in 2019 and spread globally, resulting in over 11m cases and nearly 535,000 deaths to date, according to figures.

Sputnik takes a look at the bubonic plague, its origins and affect on the world from antiquity to present.

The Plague: Spread, Symptoms and Treatment

According to the World Health Organisation, the plague spreads via fleas, infected tissue, fluids and respiratory droplets from animals and humans infected with the Yersinia pestis bacteria, and exists in three form, or Bubonic, Septicemic and Pneumonic.

The bubonic plague, which is usually transmitted from infected fleas, results in fever, headache, weakness and malaise as well as numerous swollen, painful lymph nodes across the body known as buboes.

Septicemic plague causes similar symptoms along with shock and bleeding into the skin and vital organs. Skin and other tissues become necrotic, with tissue death near the nose, fingers, and toes, and blood clots spreading in the body.

The pneumonic plague is the deadliest form with 100 percent death rates with or without treatment, with patients facing common symptoms along with shortness of breath, cough, chest pain and bloody mucous, leading to respiratory failure.

Pneumonic plague is the only form transmitted from person to person via droplets released while breathing or coughing.

The disease is 30 to 100 percent fatal, but treatment with the antibiotic streptomycin as well as gentamicin and fluoroquinolone greatly increases survival rates, studies show. There is no vaccine for the disease.

According to data, the plague is found everywhere in the world except Oceania, with most post-1990 cases prevalent in Madagascar, Democratic Republic of Congo and Peru, among several others.

But 3,248 cases and 584 deaths were reported globally to date, according to WHO figures.

According to a major study in 2010 tracing the origins of the pandemic, three waves of the plague appeared in history, with the first hitting the Byzantine Empire under Emperor Justinian, which killed half of Europe's population in the 6th century.

But the second and deadliest was the Black Death from 1347 to 1351, resulting in over 50m deaths in Europe, or roughly one-third the population at the time, with estimates up to 200m deaths globally.

Historians believe the disease originated in Asia near China and spread to Crimea via Mongolian trading ships and later, to Italy on Genoese ships with infected rats on board.

While the disease likely originated in China, it had "nothing to do with its people or crowded cities", Dr Mark Achtman of the University College Cork in Ireland said, adding the disease likely resided in rodents such as marmots and volves.

But scientists dispute claims of the plague's Asian origins as "genomic data from early outbreaks in western Russia have thus far been elusive", a 2019 study found.

The third wave of the plague began in China's Yunnan province around 1894, affecting Hong Kong and numerous shipping routes, the study revealed, adding the plague later reached Hawaii and San Francisco at the end of the 19th century.

To date the plague has been reported in western regions of the United States, with an average of seven plague cases being reported in the country a year from 2000 to 2018 and 1,006 cases from 1900 to 2012, CDC figures reveal.

US cases are normally found in "rural and semi-rural areas of the western United States", namely in New Mexico, Arizona and Colorado, where homes handle "various ground squirrels, chipmunks and wood rats" as well as other rodents.

​California and the Sierra Nevada mountains and foothills were hit by an plague outbreak in 2015 with a reported spike of 16 cases, prompting Yosemite National Park to issue warnings at "campgrounds, restrooms, and bulletin boards".

"If you have handled a wild animal or think you may have been bitten by fleas and are showing symptoms of plague contact a healthcare provider and inform them that you may have been exposed to plague. If you see any sick or dead wild animals, please report them to Yosemite staff," the California National Park Service announced at the time.