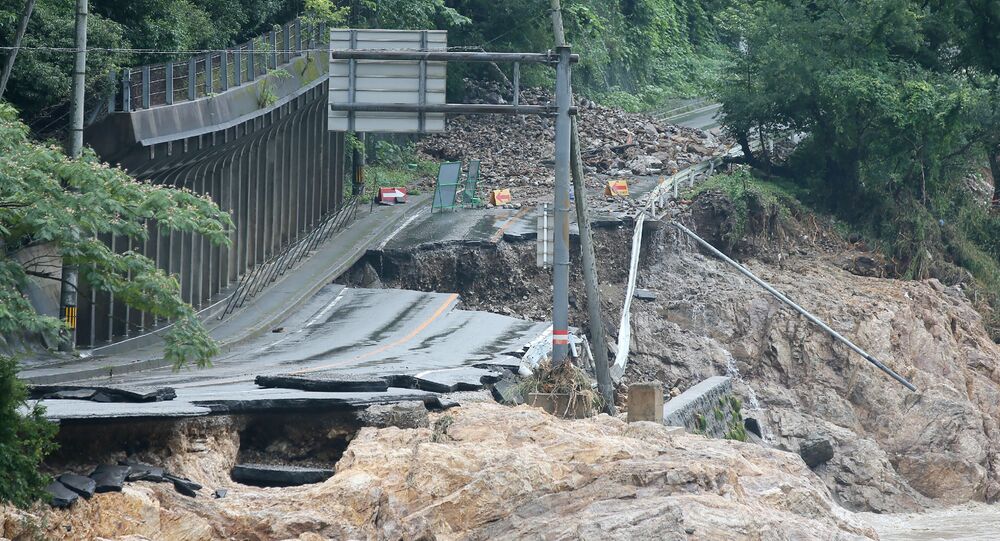 On Sunday, the authorities stated that 24 people were killed and 12 missing.

The broadcaster said that the death toll was now at 41 as of 5:00 p.m. local time (08:00 GMT), and data on the number of people who went missing had not been updated yet.

Record-setting rainfall, which saw some regions receive as much as four inches of rain per hour, battered southwestern Japan in the early hours of Saturday. The rainfall caused the Kuma River to overflow its banks in several areas, cutting off roughly 30 districts in the Kumamoto prefecture.

The emergency warnings have been issued in the prefectures of Nagasaki, Saga, and Fukuoka. The warnings are the most severe the agency can issue, with flooding and landslides expected, and citizens are urged to move to emergency shelters or buildings with strong foundations.

© AFP 2020 / STR
A man looks at the overflowing kuma river caused by heavy rain in Yatsushiro, Kumamoto prefecture on July 4, 2020. - Some 75,000 people were ordered to evacuate in western Japan on July 4 as record heavy rain triggered floods and landslides, local media and officials said. The nation's weather agency issued the highest level of heavy rain warnings to Kumamoto and Kagoshima on Kyushu island.

Severe rainfall in the neighbouring province of Kumamoto in the early hours of Saturday morning resulted in widespread flooding and mudslides that have left at least 44 people dead, the Kyodo News agency reports on Monday.

Some regions of Kumamoto experienced as much as four inches of rainfall per hour, as rescuers struggled to access settlements that were cut off by floodwaters or debris.

Japanese Prime Minister Shinzo Abe mobilized 10,000 Self-Defense Forces troops to aid in the recovery and rescue operations in the region.