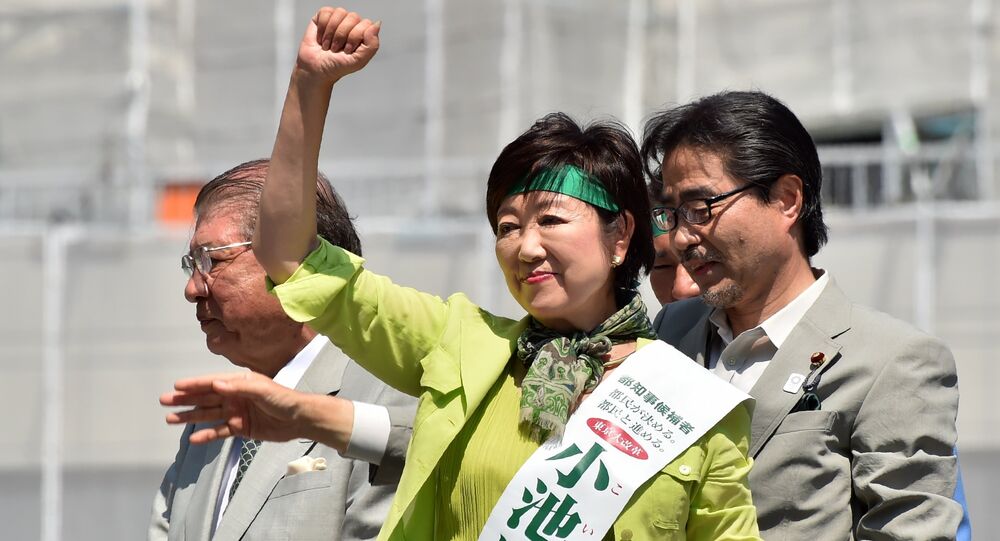 TOKYO (Sputnik) - Tokyo Governor Koike Yuriko is the front-runner in an election race that is likely to see her lead the Japanese capital for another four years, media in Japan reported on Sunday, citing exit polls.

Tokyo held gubernatorial elections on Sunday, with final results expected to be announced the next day. Koike is racing against 21 other candidates, including renowned lawyer Kenji Utsunomiya and politician Taisuke Ono.

According to the NHK, Japan's national broadcaster, Koike is leading the vote with 60 percent, followed by Utsunomiya and Ono, with no specific figures available for the latter two.

"I will make the maximum efforts to justify the trust bestowed upon me during the second term as governor of Tokyo," Koike said in an address on national television after the exit polls were revealed.

© REUTERS / Kyodo
Yuriko Koike (R) and her supporters celebrate her win in the Tokyo Governor election in Tokyo, Japan, in this photo taken by Kyodo July 31, 2016.

Specifying her priorities for the second term, Koike highlighted the coronavirus-related policies, saying that it was now "the right time to prepare for a second wave" and take decisive measures.

Before becoming Tokyo's first female governor after a landslide victory in the election of 2016, Koike served as a lawmaker in the Japanese parliament and held two cabinet positions — that of environment minister and defence minister — in the governments of Junichiro Koizumi and Shinzo Abe, respectively.