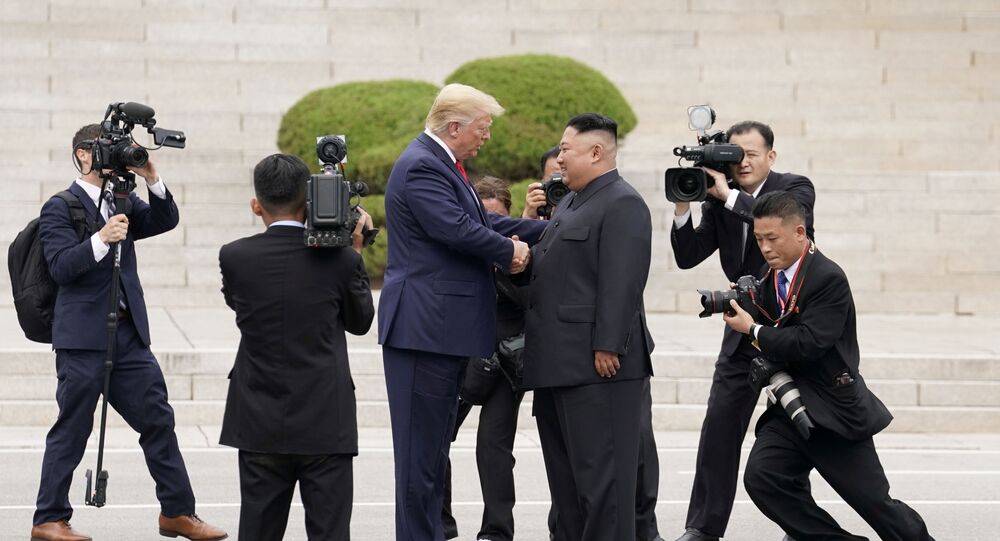 US President Donald Trump and North Korean leader Kim Jong-un met three times in the period between 2018 and 2019 to discuss, among other topics, the Korean peninsula and the possibility of denuclearization. However, the three one-on-one summits fell far short of achieving their goals.

South Korean President Moon Jae-in on Tuesday said that US President Donald Trump and North Korean leader Kim Jong-un should hold a fourth one-on-one summit prior to the US presidential election in November, Reuters reported on Wednesday, citing an unnamed Seoul official.

During a virtual meeting with European Council President Charles Michel on Tuesday, Moon said another Trump, Jong-un summit would be helpful to resume stalled nuclear negotiations.

“I believe there’s a need for North Korea and the United States to try dialogue one more time before the US presidential election,” the South Korean official quoted Moon as saying, according to the outlet. “The issues of nuclear programmes and sanctions will ultimately have to be resolved through North Korea-US talks”.

The unnamed Seoul official added that the South Korean leader has already conveyed these views to Washington and that officials with the Trump administration are currently making efforts to restart the talks.

Earlier in the week, the US deputy Secretary of State, Stephen Biegun, said that there was still time for Washington and Pyongyang to resume talks and “make substantial progress”.

Biegun, who was taking charge of working-level negotiations with Pyongyang, also noted that holding an in-person summit before the November vote would be problematic due to the coronavirus (COVID-19) pandemic, what makes the potentiality of holding a virtual summit possible.

Trump and Jong-un have held three one-on-one summits, one in Singapore in 2018 and two in 2019; in Vietnam and at the demilitarized zone between North and South Korea. The two leaders discussed the state of affairs on the Korean peninsula and possibility of denuclearization. None of the summits succeeded in achieving the set goals, as the US president failed to convince Pyongyang to give up its nuclear weapons, while the east Asian nation’s demand of easing US unilateral sanctions has not been met.

Tensions on the Korean peninsula escalated recently after North Korea blew up an Inter-Korean Liaison office on 16 June, threatening state-level action if Seoul failed to suspend a campaign launched by South-based defectors flying anti-Pyongyang leaflets on balloons across the border.

Pyongyang later again abandoned military plans against its Southern neighbor, according to Reuters. In exchange, North Korea said it would lead its own form of information campaign against Seoul.

'I Wish Him Well': Trump Says He Has a 'Very Good Idea' of Kim Jong Un's Status