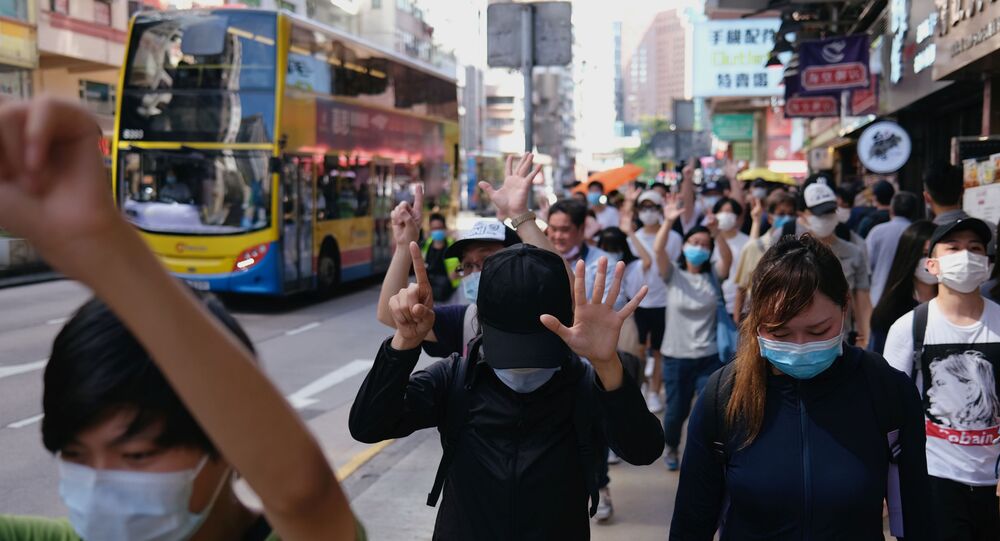 MOSCOW (Sputnik) - Police in Hong Kong have arrested 53 protesters on Sunday during a unsanctioned demonstration in the Mong Kok region of the city, according to a press release.

“At around 5pm [09:00 GMT] today, Police intercepted some protestors near Sai Yeung Choi Street, Mongkok and arrested 53 persons, including 41 males and 12 females, for Unlawful Assembly. Police are conducting enforcement actions in the vicinity to restore public order at the moment”, the Hong Kong Police Force said.

Law enforcement officers gave protesters multiple warnings to disperse, and pepper spray was used after demonstrators became aggressive, according to the press release.

Widespread protests continue to take place in Hong Kong against new security legislation that was passed in late May by the National People’s Congress in Beijing.

On 20 June, the Chinese authorities revealed the details of the proposed security bill, which threatens jail terms and hefty fines for any secessionist activity and attempts to undermine the state’s authority.

According to the bill, the Chinese government also intends to establish a national security agency in Hong Kong, which will make policy recommendations and analyse the security situation in the special autonomous region.

Beijing has consistently stated that the ongoing public unrest in Hong Kong is the result of foreign interference in China’s domestic affairs.