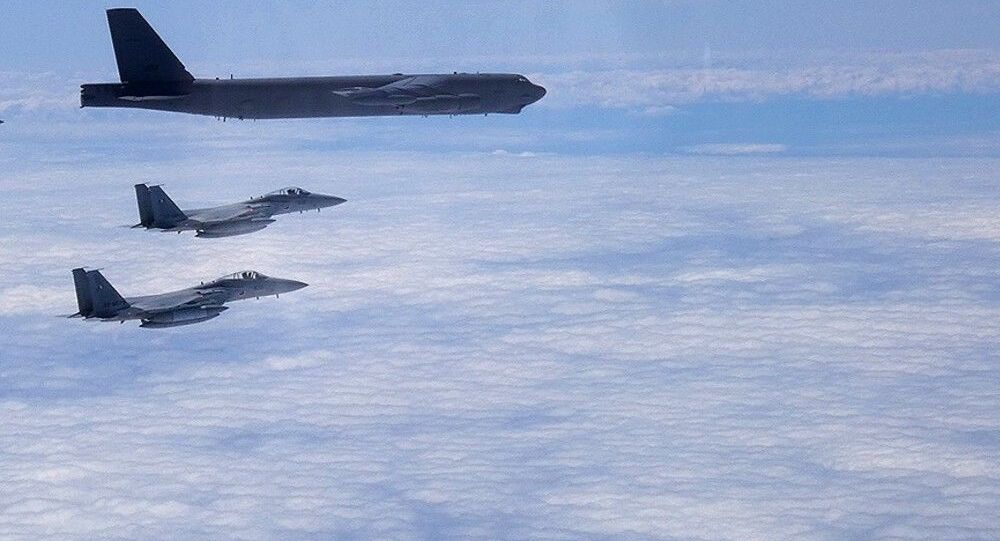 Japanese Air Self-Defense Force (JASDF) fighters, US Navy E/A-18G Growlers and two US Air Force B-52H Stratofortress bombers linked up over the Sea of Japan on Wednesday to conduct a number of training missions and demonstrate their joint readiness in the Indo-Pacific region.

Pacific Air Forces detailed in a June 17 news release that US and Japanese service members were able to conduct a number of realistic, lengthy missions while demonstrating the forces’ “unwavering commitment to the security and stability of the Indo-Pacific region.”

The B-52s were observed conducting long-range escort and intercept training with four F-2s and 12 F-15s of the JASDF.

“These strategic bomber missions provide our Airmen with the realistic long duration sorties that they require to remain highly proficient and ready to act when called upon to support the collective defense of the United States,” explained Lt. Col. Christopher Duff, the 96th Bomb Squadron commander from Louisiana’s Barksdale Air Force Base.

“Deploying in an expeditionary format challenges our aircrews, maintainers and support personnel in different theaters, further demonstrating the credibility of our forces to be agile and provide long-range global strike capability, anywhere in the world, and at any time.”

Like Duff, the B-52s are normally based out of Barksdale, but the long-range strategic bombers have been deployed to Alaska’s Eielson Air Force Base since June 14 to support these joint efforts, termed “Bomber Task Force” (BTF) missions.

The E/A-18G Growlers from the US Navy Reserve’s Electronic Attack Squadron 209 - dubbed the “Star Warriors” - have been deployed to Japan’s Misawa Air Base.

The US service members were also able to conduct their own integration training during the BTF mission, which represents the US Air Force’s attempt to meet “National Defense Strategy’s objectives of strategic predictability and operational unpredictability.”

“The BTF missions enable a mix of different types of strategic bombers an opportunity to train alongside Allies and Partners in a joint environment and to build interoperability to bolster their ability to support a free and open Indo-Pacific,” Kline said in the release, noting that a similar training mission over the Beaufort Sea on June 14 involved a B-52 integrating with F-22 Raptors and CF-18 Hornets of the Royal Canadian Air Force.

“The B-52 Stratofortress has been the backbone of the US strategic bomber force more than 60 years, capable of dropping or launching the widest array of weapons in the US inventory,” Kline asserted.

The Air Force intends to continue flying the long-range strategic bomber through at least 2050.