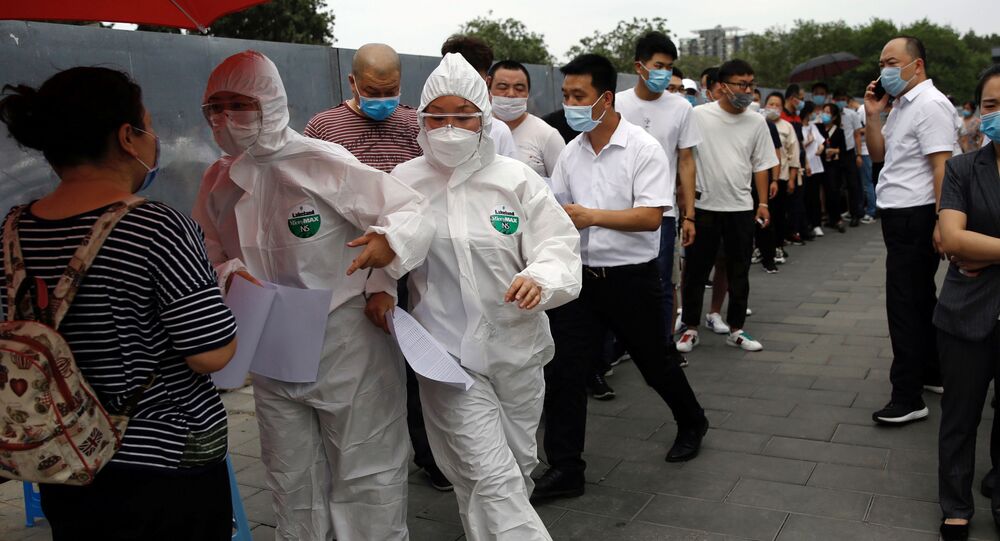 Beijing’s two major airports canceled two-thirds of all their flights Wednesday, and the government has also shut down schools as the Chinese city faces a new COVID-19 outbreak.

On Tuesday, Beijing officials reported 31 new cases of the novel coronavirus; the total number of cases confirmed in the Chinese capital since June 11 is 137. The outbreak has been traced to the Xinfadi food market in Beijing’s southern Fengtai District. The market was shut down on Saturday, the Guardian reported.

“The risk of the epidemic spreading is very high, so we should take resolute and decisive measures,” Xu Hejian, a spokesperson for the Beijing city government, said at a news briefing on Monday, the Guardian reported.

"Because the Xinfadi market is the largest marketplace selling daily necessities, with thousands of migrant workers and a large number of visitors, it is hard to control the spread," Pang Xinghuo, deputy director of the Beijing Center for Disease Control and Prevention, told reporters, according to AFP. "We may see a rise in confirmed cases in the coming days."

On Monday, officials closed off around 21 residential communities near Xinfadi. The approximately 90,000 people in those communities have been asked to get tested for the virus and quarantine at home. The residential compounds have also established security checks. In addition, schools in Beijing have been closed, and temperature checkpoints have been reinstated at malls and public places; COVID-19-related restrictions in the country were lifted in many public areas on April 30.

Beijing has also quickly increased testing capacity and is collecting about 400,000 samples a day, according to Zhang Qiang, an official with Beijing's epidemic prevention task force, AFP reported.

Authorities are fearful that the virus could spread outside of Beijing. Two cases in the Liaoning province and three in the Hebei province are also believed to be linked to the cases in Beijing. According to Reuters, new cases believed to be related to Beijing have also been reported in the provinces of Sichuan and Zhejiang.

The Chinese city of Daqing in the northeastern province of Heilongjiang has now mandated that all travelers from Beijing quarantine for 21 days. A flight to Guangzhou in the southern province of Guangdong was also canceled this week after 17 travelers on the flight tested positive for COVID-19.

Six days ago, Beijing confirmed a new COVID-19 case in the country’s capital for the first time in nearly two months. The patient is a 52-year-old man who first checked into a clinic on June 10 with a fever. The patient confirmed that he had neither left Beijing nor been in contact with anyone who had been traveling overseas in the last couple of weeks.

The latest data by Worldometer shows that there are currently 252 infected patients in all of China. Five of those cases are designated as “serious” or “critical.”

How World Leaders Deal With COVID-19

NHS Staff Should Be Checked For COVID-19 Twice a Week, President of Royal College of Surgeons Says