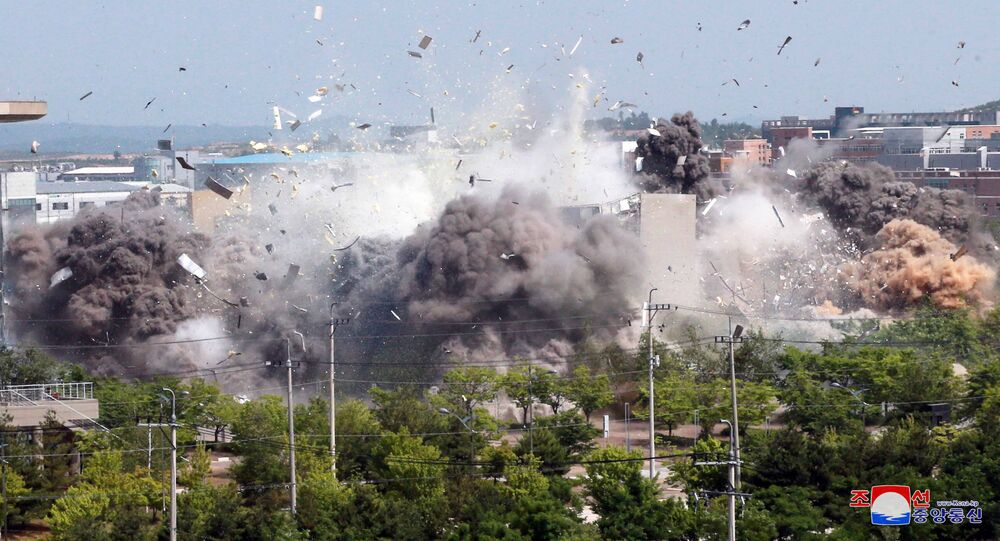 South Korea convened a top security meeting following the blast, which occurred on Tuesday at 2:49 p.m. local time, and issued a threatening statement saying Pyongyang would receive a strong response if it decides to worsen the situation.

Newly released close-up footage shows the moment North Korea destroyed an inter-Korean liaison office established in 2018 as a symbol of reconciliation between the two states. Following the blast, which occurred at 2:49 p.m. local time, Seoul issued a threatening statement saying Pyongyang would receive a strong response if it decides to escalate the situation.

Earlier today state media in North Korea issued a statement explaining why it decided to destroy the office used as a de-facto embassy and a communication channel between the two countries. Pyongyang claimed Seoul had been systematically breaching agreements reached by the two states in 2018, including the Panmunjom Declaration signed by North Korean leader Kim Jong-un and South Korean president Moon Jae-in and which stressed both countries’ commitment to end "hostile activities". Kim Jong-un’s sister, Kim Yo-jong blamed South Korean President Moon Jae-in, whom she described as a US flunkey, for not implementing the bilateral accord.

Following the destruction of the inter-Korean liaison office North Korea’s military said it would resume all regular exercises and send troops to the border with the South.

The unexpected escalation of tensions between the two neighbours, which are still technically at war since the Korean conflict ended in 1953 with an armistice, follows weeks of aggressive posturing from North Korea, specifically Kim Jong-un’s sister Kim Yo-jong, who was reportedly put in charge of relations with Seoul and whom South Korean media described as a "bad cop" in negotiations with its neighbour.

Ms Kim threatened to cut off communication with South Korea and demolish the "useless" channel [inter-Korean liaison office] if South Korean authorities failed to stop activists from sending propaganda leaflets via balloons to the North. The leaflets in question condemn Pyongyang’s alleged human rights abuses. At the beginning of June, South Korean authorities voiced their intent to prohibit the activity, which an anonymous official from the president’s office described as doing "all harm and no good" but have since introduced no legislation.

Experts say Pyongyang may have deliberately blown up the inter-Korean office to escalate tensions and gain leverage in negotiations with Seoul should they resume.