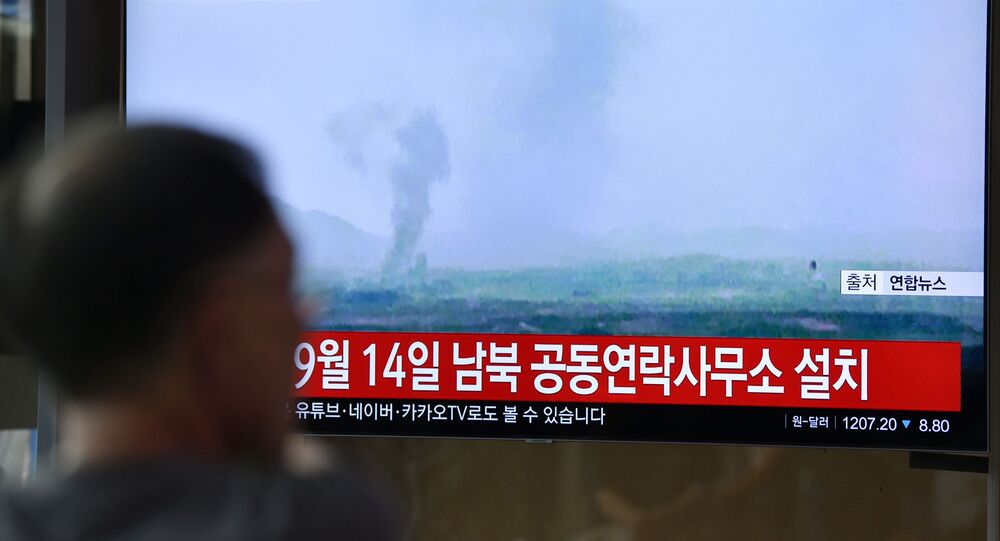 The South Korean Unification Ministry has confirmed that an explosion took place at the inter-Korean office in the border town of Kaesong at 2:49 p.m. local time on Tuesday.

The statement comes after the Yonhap news agency cited sources as saying that a blast had been heard from the joint Kaesong industrial complex located near the North Korean border. North Korea's state broadcaster, KCTV, has confirmed the explosion of the joint-liaison office.

South Korean Deputy National Security Adviser Kim You-geun, in turn, told reporters on Tuesday that the destruction of the Kaesong office “broke the expectations of all people who hope for the development of inter-Korean relations and lasting peace on the [Korean] peninsula”.

The official made it clear that “the North is entirely responsible for all the consequences this might cause”.

Meanwhile, a video allegedly showing the explosion has been published by the Twitter user nicknamed Victoria Kim.

Chinese Foreign Ministry spokesperson Zhao Lijian, in turn, urged Seoul and Pyongyang to maintain peace and stability on the Korean Peninsula in the wake of the explosion, referring to the North and the South as part of the same nation.

The developments follow South Korean President Moon calling on North Korea on Monday to persevere in their joint peace efforts, in what became his first official remarks after Pyongyang cut all communication channels with Seoul.

"The direction the two Koreas should go together is clear. We should not stop the current inter-Korean relations again, which have overcome a longtime severance and the crisis of a war with difficulty", Moon pointed out.

Referring to the truce agreed on with the North Korean leader in 2018, Moon noted that the sides "can't let the promise of peace on the Korean Peninsula, which I and Chairman Kim Jong-un made in front of 80 million Koreans, revert".

Relations between the neighbours soured last week as North Korea threatened state-level action if Seoul failed to curb a campaign by South-based defectors of flying anti-Pyongyang leaflets on balloons across the border.

Kim Yo-jong, the sister of North Korean leader Kim Jong-un, for her part, slammed South Korea as "the enemy", adding that Seoul would soon see the collapse of a "useless" liaison office in the border town of Kaesong.

"By exercising my power authorised by the supreme leader, our party and the state, I gave an instruction to the arms of the department in charge of the affairs with the enemy to decisively carry out the next action”, she said in a statement. According to her, she felt it was "high time to break with the South Korean authorities”.