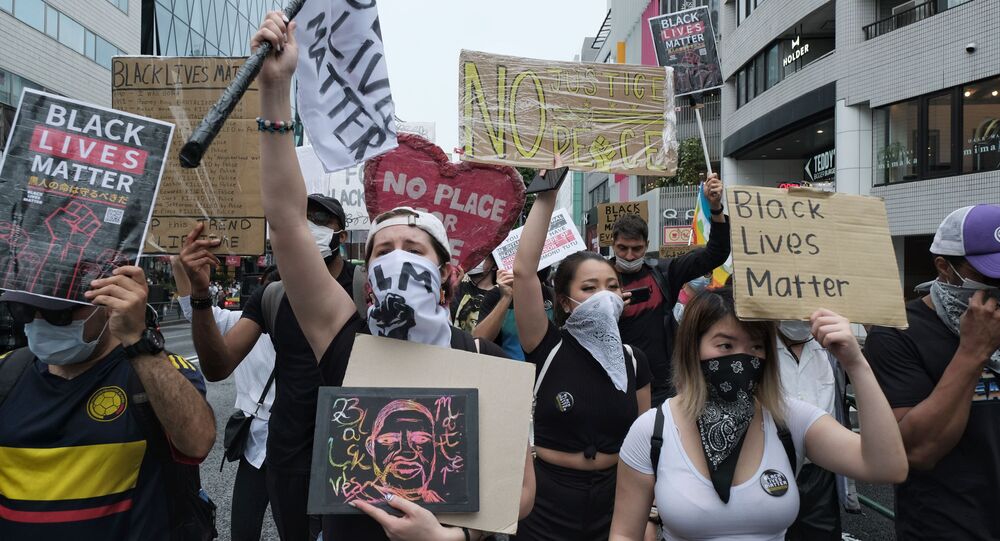 Over 3,000 people gathered in downtown Tokyo on 14 June to take part in a peaceful march in support of the Black Lives Matter movement.

Although the event was mainly focused on the problem of racism and violence against black people, the participants came to speak out for the rights of the LGBTQ+ community and other people subjected to xenophobia and discrimination.

Sputnik’s correspondent visited the event and talked to its organizers and participants.

Despite the rainy Sunday, an hour before the march started, crowds of people of various ages and nationalities gathered in the event centre of Yoyogi (代々木イベントプラザ) where the march took place. Some people even came with their whole families and small children.

Since, according to Japanese laws, foreign citizens are not allowed to engage in protests, the peaceful march organizers had repeatedly asked those present to pay special attention to the fact that any provocations, political statements, as well as insulting law enforcement officers or local residents was prohibited.

The activists were closely watched by more than a hundred Japanese police officers, who, among other things, ensured their safe movement along the pre-determined route.

Since there were a lot of people, the participants were asked to line up strictly with three in one row, as well as split into several waves [of people]. The participants also had to wear medical masks and keep a social distance.

For more than two hours, the activists marched through the streets of Shibuya and Harajuku, drawing attention to the problem of discrimination with various posters and slogans. During the march, the activists also shouted slogans, like “Black lives matter” and “What do we want? Justice! When do we want it? Now!”

The fact that the march took place by the NHK Fureai Hall (NHK みんなの広場ふれあいホール) is probably an accident. However, some of the activists seized the opportunity to take pictures with the slogans by the building, thereby expressing dissatisfaction with the NHK’s viral animated video NHK, which incorrectly presented the situation with black people in the United States.

What it All Started With

The peaceful march was organised by African-American Sierra Todd, who is quite a fashion icon in Harajuku. According to her close friend, who was also involved in organizing the event, they didn’t expect the movement to become so widespread in Tokyo.

“It happened quite randomly. Two weeks ago, Sierra and her college friends were walking in Harajuku, and people, paying attention to their posters, asked if they could also join in. Sierra agreed and created a community on social networks; when we went to bed, there were only 50 members there. The next day there were already about 300 members. I don’t think she could imagine what it would all turn into. But now she is investing in all this very much. And I think we got an incredible response,” Sierra’s friend said after the march. (The girl wished to remain anonymous, just like all the other protesters interviewed by Sputnik).

My most recent @tokyofashion feature 🖤 I think this pic was taken in...March? Idk, sometime earlier this year

“There are other online communities that organize such marches. We, “Black Lives Matter Tokyo”, are doing this for the first time. We are not some kind of an officially registered organization, and we are unlikely to re-hold such a march in the near future. But we won’t let this die, we plan to maintain our community – we think that the march is a good starting point to achieve something more in the future,” the girl explained.

Despite the fact that an impressive number of people took part in the march, it should be admitted that the vast majority of its participants were still foreigners.

“I am very grateful to the Japanese who decided to join us. Yes, maybe there are not so many Japanese among the participants, but if we had managed to attract attention and make people want to come up and ask what this was all about, I believe we have achieved our goal. Moreover, I believe that there is a problem of discrimination in Japan. But it manifests itself here differently, not like in the United States. Here, of course, we are not talking about the police killing people. But racism is racism – it exists absolutely everywhere. Being an African American, I’m very glad to be in Japan; I’m grateful for everything that I have. I’m not scared to be here,” the girl said.

Another Japanese girl, one of the event’s organizers, explained why being involved in this movement was important for her personally:

“I think that the Japanese tend to believe that there is no racism in their country, because ethnically our population is quite homogenous. They believe it to be an American problem. But it not only an American problem, and at the same time it is not a Japanese problem; it is a global problem. Therefore, we want more Japanese people to know about the fact that racism and other forms of discrimination are around both in Japan and around the world. The similar situation is with the LGBTQ+ representatives: many Japanese believe that there are no these people in Japan, based on the fact that they don’t come across them, but such people do actually exist and need support.”

“They Say 怖い, I Don't Want to Get Black – What Does That Even Mean?”

From talking to black people, it became clear that many people have a different understanding of the sense of security. In particular, an African girl explained why she didn’t feel safe in Japan:

“I see rather peculiar manifestations of racism here. For example, they told me “怖 い (I’m scared), I don’t want to touch you and get black,” what does that even mean? Even at work, I feel this biased attitude. When talking about a sense of security, it’s important to understand what we mean by that. Of course, we see that in the US, the manifestation of racism often turns into physical violence; but there is also mental harm. And it happens every day. Speaking about the mental component, I don’t feel safe here.”

Bias Towards ハーフ (Mestizos) and Foreigners

According to a white American who has been living in Japan for many years and is one of the march organizers, sometimes not only dark-skinned people but also mestizos have hard times in Japan.

“I have friends who suffer from discrimination here. I have also spoken to many Japanese who hold discriminatory views. From a foreigner’s perspective, living in Japan can be difficult. But being a white foreigner, I have certain benefits. Yes, I can also encounter misunderstanding, but it is much easier for me than for my dark-skinned friends. I also have mestizo friends who grew up in Japan and who have an African American parent. They are faced with the fact that people discuss them behind their backs or suggest that such people don’t have a kinship with their Japanese parent. There are also unobvious signs of discrimination, which in fact is discrimination if you think about it. That is why it is important to identify such cases of discrimination so that we can overcome them all together.”

At the same time, some participants in the march noted that they were taking part in the demonstration not because they wanted some changes in Japan, but only in solidarity with what was happening in the United States, which still gets very little coverage in the Japanese media.

“Our Calls are Quite Natural”

And although some of the black participants in the march said that they might feel quite uncomfortable among the Japanese, there were those who spoke quite positively about their position in the country.

“The Japanese are wonderful people, they treat us very well. Therefore, we like living here. I think that many countries have a lot to learn from Japan, it can become an important model. In this country, we don’t have what is happening in the US. If different countries’ governments see these marches, they will understand that this is a big movement that cannot be ignored: they will have to to reckon with it. Indeed, in fact we have the same blood flows, the skin colour doesn’t matter – our calls are quite normal and natural,” a black man said.

Repost from @djsarasa • From Today’s #blmtokyomarch #blm東京行進 ⚡️Proud moment of Japan coming together for one purpose. Also big up my fam Mance with his beautiful finishing speech @cameramance_work 😭👏 Police said we had over 3500 people marching but from what I saw (as someone who deals with crowds) i would say it was around 10000people🧐 ⁉️ Thank you all for showing up, and let’s all keep showing up. let’s keep the rhetoric going!!! 東京都でも今日平和なマーチがあり、参加させていただきました。馴染みのある顔も沢山で、色々な人種、年齢、性別の方達が集まった何ともあたたかい行事でした。警察によると3500人が参加したという報告らしいですが、DJの視点では、1万人ぐらいに見えましたけど😅これで終わりではありません。一緒に会話を続けて意識、知識をどんどん高めていきましょう🙏‼️ #blacklivesmatter #blmtokyomarch #blm東京行進 #georgefloyd #icantbreathe #icanbreathe #mancethompson #blmmovement #ジョージフロイド #人種差別 #人種差別反対