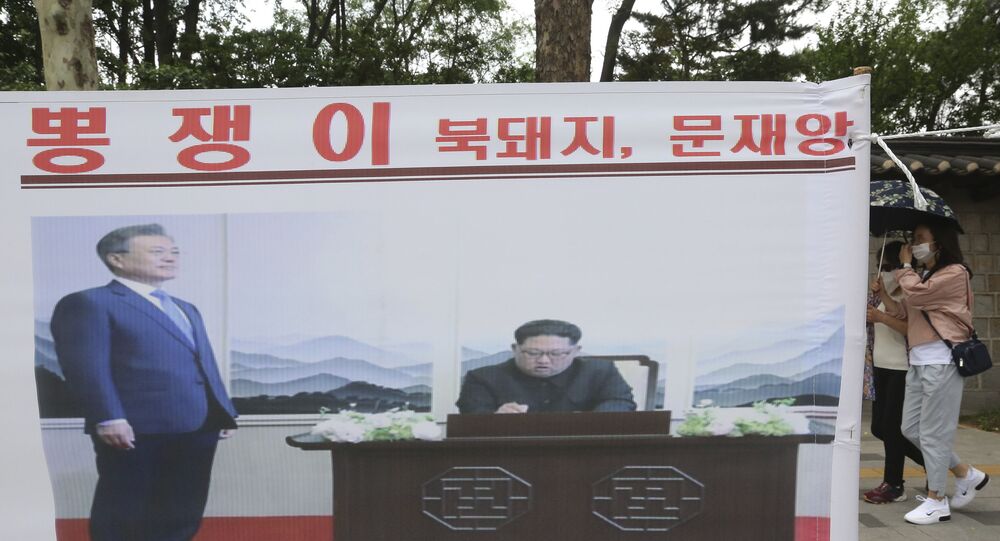 MOSCOW (Sputnik) - South Korean President Moon Jae-in called on Pyongyang on Monday to persevere in their joint peace efforts in his first official remarks after North Korea cut all communication channels with Seoul.

"The direction the two Koreas should go together is clear. We should not stop the current inter-Korean relations again, which have overcome a longtime severance and the crisis of a war with difficulty," Moon said, as cited by the Yonhap news agency.

The president's remarks come on the 20th anniversary of the Joint Declaration, adopted during a historic summit between the late leaders of the two nations, South Korea's Kim Dae-jung and North Korea's Kim Jong Il.

According to Moon, it is not easy to commemorate such an event after Pyongyang's decision to cut all communication lines with Seoul and threats of military action.

"(We) can't let the promise of peace on the Korean Peninsula, which I and Chairman Kim Jong-un made in front of 80 million Koreans, revert," Moon noted, referring to the truce agreed on with the North Korean leader in 2018.

Commenting on stalled denuclearization talks between the United States and North Korea, Moon suggested that Seoul and Pyongyang explore "breakthrough" on their own, without waiting for external conditions to improve.

Relations between the Asian neighbours soured last week as North Korea threatened state-level action if Seoul failed to curb the campaign by South-based defectors of flying anti-Pyongyang leaflets on balloons across the border. Kim Jong Un’s sister, Kim Yo Jong, said the counteraction would include demolishing the inactive South Korean industrial compound in Kaesong, shutting down the joint communications office and withdrawing from the bilateral military agreements.

On 9 June, the Korean Central News Agency said that all communication channels with South Korea had been completely cut, including military channels and the highest-level channel between the heads of state. According to the South Korean Defense Ministry, their counterparts from the North have stopped responding to military communications.