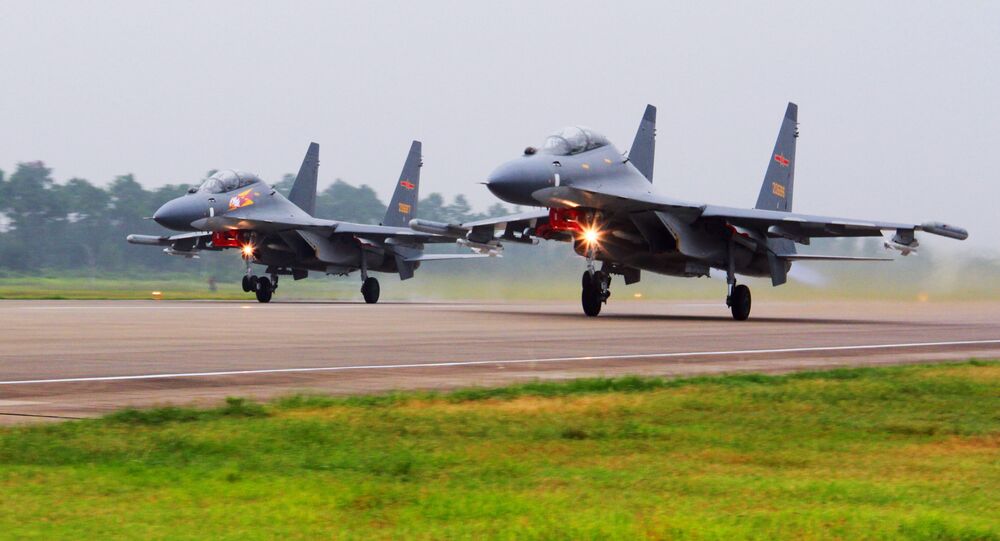 Several Chinese Su-30 fighters were intercepted over international waters by Taiwanese jets after they crossed the median line of the Taiwan Strait Tuesday. The incident comes just a day after a US plane was allowed to fly across Taiwan and days after a US warship sailed through the strait.

“The military has full surveillance and control of all activities in the sea and air that surround Taiwan, and the public can rest assured of our capability to uphold security for our national territory,” it said. This was the ninth such incident this year.

Taiwan claims everything east of the strait’s centerline as its own airspace, but legally speaking, Taipei only controls a tiny fraction of the waterway.

US Military Transits Unhindered by Taipei

The incident comes just a day after a US Navy C-40A Clipper cargo plane flew over the length of Taiwan on its way from the US air base on Japan’s Okinawa Island to U-Tapao air base in central Thailand. According to Taiwan News, the plane also flew over the Dongsha (Pratas) Islands, a chain southeast of Hong Kong controlled by Taiwan.

​The China Times, a Chinese-language paper published in Taiwan, cited Taiwanese officials familiar with the matter in a report that the C-40 had suddenly requested an emergency landing because it was having landing gear problems, adding it was carrying “high-ranking US officials.” However, the plane touched down at Ching Chuan Kang Air Base in Taichung for just five minutes before taking off again.

Taiwan’s Defense Ministry later denied the plane had landed in a statement, according to the SCMP.

Song Zhongping, a Chinese mainland military expert and TV commentator, told Beijing’s Global Times the C-40 flight was “a straight-up provocation hatched by the Taiwan and US militaries, signifying the increasing military cooperation between them.”

Last week, a US Navy guided missile destroyer, the USS Russell, also sailed through the Taiwan Strait in what Washington calls a “Freedom of Navigation Operation,” ostensibly to “demonstrat[e] the US commitment to a free and open Indo-Pacific,” as the Navy put it.

The US switched its recognition of the Chinese government from Taipei to Beijing in 1978, but has maintained informal relations with the autonomous island ever since, walking a fine line regarding what the mainland is willing to tolerate. The People’s Republic of China considers Taiwan, the last remaining artifact of the pre-communist Republic of China after its 1949 defeat in the civil war, to be a wayward province, and thus sees the airspace and seas over and around Taiwan as its own.

The government in Taipei, likewise, claims to be the sole legitimate representative of China - a position just a handful of nations now back.

Despite this, the US continues to use the island as a perpetual thorn in China’s side, as the Trump administration has moved to more directly confront Beijing and foster closer ties with Taiwan and its pro-independence ruling party. Last year, Washington finalized a deal to sell Taipei advanced F-16V “Viper” fighter jets. Chinese President Xi Jinping has pledged that if Taiwan declares independence, there will be war.