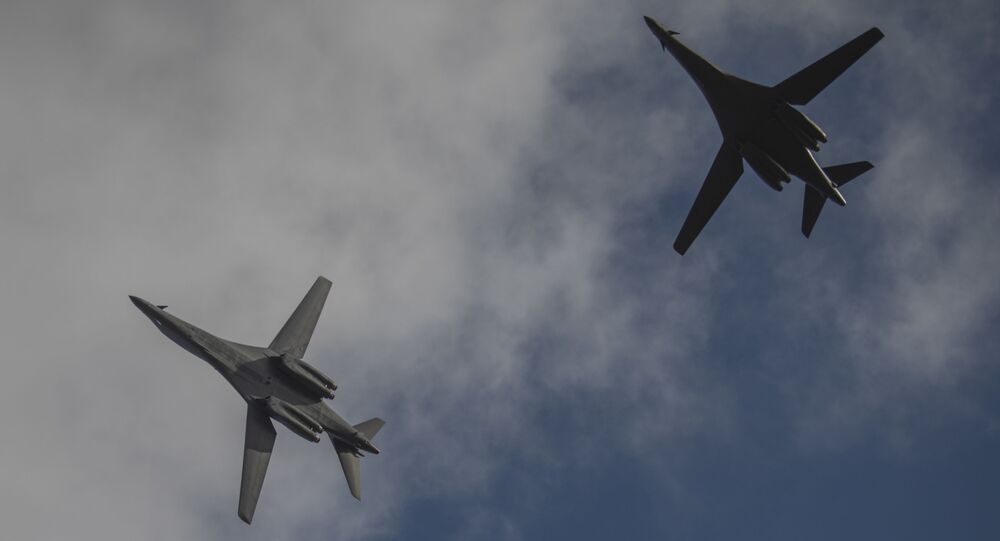 The US Air Force announced on Wednesday another South China Sea patrol by B-1B Lancer bombers based in Guam. The same day as the drills, China’s aircraft carrier Shandong was spotted leaving port as reports emerged of upcoming two-carrier drills alongside Shandong’s sister ship, the Liaoning, and more over the summer.

On Tuesday, the US Pacific Air Forces Twitter account announced the patrol involving two supersonic Lancer bombers, which had “conducted a mission in the South China Sea on May 26 as part of a Bomber Task Force mission, showcasing their ability to fly, sail, & operate anywhere international law allows, at the time and tempo of our choosing.”

Last week, Maj. Gen. Jim Dawkins Jr., commander of the Eighth Air Force and the Joint-Global Strike Operations Center, boasted that the B-1B Lancer, now modified to carry substantially more missiles, including the Long Range Anti-Ship Missile (LRASM), is “perfectly suited for the Pacific theater.” With a purported range of 230 miles, the LRASM has the potential to be a game-changer in the region, and the Lancer, which can carry at least 24 LRASMs, is being repurposed into a maritime patrol aircraft.

The patrol is just the latest by the aging bombers, as Washington has made several demonstrations of readiness and military strength amid a devastating pandemic at home, which has killed nearly 100,000 Americans. The Pentagon has dispatched nuclear-capable aircraft for surprise drills in northern Europe, Japan, the South China Sea and Canada over the past two months.

Meanwhile, the Chinese People’s Liberation Army Navy (PLAN) is preparing for increased drills and patrols of its own in the East and South China Sea, where Chinese and American forces have clashed in tense situations over the past few months as the US rushes to demonstrate its contempt for Chinese territorial claims.

Beijing-based naval expert Li Jie told the publication the Shandong was “now laying the foundation for forming initial operational capability,” having formally joined the fleet late last year. The Shandong was built based on lessons from her sister ship, the Liaoning, which Beijing bought from Ukraine, finished and refurbished as the PLAN’s first carrier.

The UK-based Daily Mail also reported on Monday that the Liaoning was in the Bohai Sea, a gulf that is part of the western Yellow Sea and near its home port of Qingdao, suggesting it would also be taking part in the drills.

The day prior, the South China Morning Post reported, citing an anonymous PLA insider, that “an aircraft carrier strike group will pass through the Pratas Islands on its way to the exercise site to the southeast of Taiwan in the Philippine Sea” in August. As Sputnik reported, Japan’s Kyodo News reported earlier this month the PLA would be practicing an invasion of Taiwan’s Pratas Islands during drills on nearby Hainan Island. Beijing has not announced the drills.

The insider also noted that as Taiwan has stationed just 200 troops in the Pratas Islands, the idea that such massive drills would rehearse their seizure “doesn’t make sense.”

However, Guam, a US territory that hosts several military installations, including Andersen Air Force Base where four Lancer bombers were recently stationed, sits on the eastern edge of the Philippine Sea.

In a report last week on military confrontation in the South China Sea, the Washington, DC-based think tank the Council on Foreign Relations warned that the risk of war between China and the US “could rise significantly in the next eighteen months, particularly if their relationship continues to deteriorate as a result of ongoing trade frictions and recriminations over the novel coronavirus pandemic.”