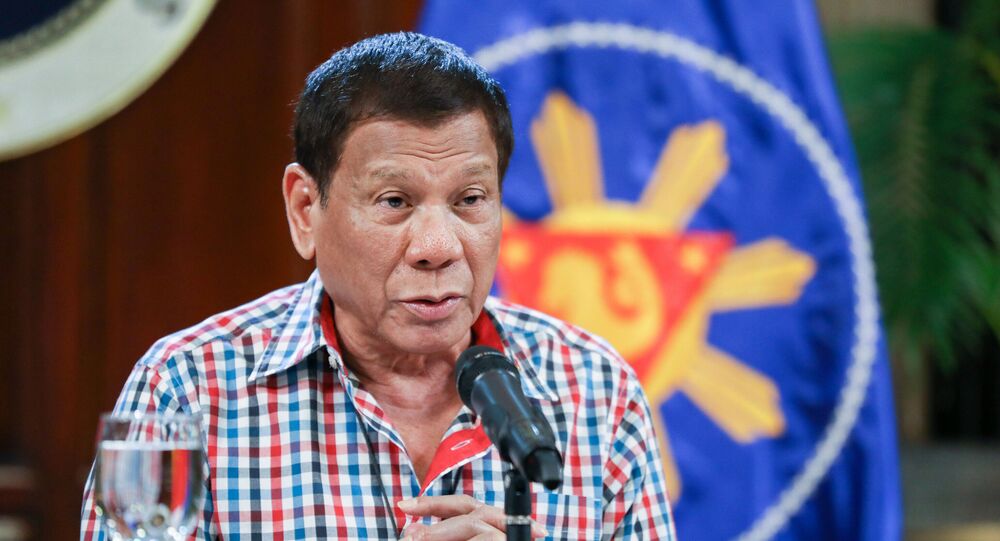 Last week, one of the Philippine president’s critics resorted to Twitter to offer an almost $1-million-dollar bounty for anyone who would kill Duterte. The person, who turned out to be a 25-year-old public school teacher, was arrested on Monday.

Representative of Philippines-based Alliance of Concerned Teachers and lawmaker France Castro have called for the release of Ronnel Mas, a teacher who was arrested this week after his twitter post offered a P50 million reward ($0.996 million) for the murder of President Rodrigo Duterte, Inquirer reported.

“We demand for the immediate release of teacher Ronnel Mas”, Castro said in a statement as quoted by the outlet.

The lawmaker said that the arrest shows the “hypocrisy of law enforcement” and “reeks of double standards”, because Duterte himself has never faced legal prosecution despite occasionally resorting to strong language when discussing his opponents.

“President Duterte has been threatening to kill and even gives out shoot-to-kill orders against critics, activists and the poor which have resulted in many deaths and harassment against human-rights defenders”, the ACT representative continued.

According to reports, 25-year-old Mas was arrested in Zambales on Monday, after he tweeted last week that he “will give a P50 million-reward to whoever will kill Duterte”. He also accompanied his post by #NoToABSCBNShutDown hashtag, apparently referring to ongoing dispute over non-renewal of the broadcast network’s franchise in the country.

LOOK: Mr. Ronnel A. Mas @RonPrince_ , a 25-year-old public school teacher, was arrested in #Zambales by NBI agents after posting on Twitter an offer of ₱50-M to whoever can kill President Duterte.#WeProtectPresidentDuterte pic.twitter.com/qLOwzQYQin

​The recordings of Mas’s interrogation by the National Bureau of Investigation and videos of him in detention have been circulating on social media ever since. The teacher has apologized for his words, arguing that they were part of a bid to attract more followers on social media, as he did not actually want to have Duterte killed nor did he have this kind of money. However, the Justice Secretary Menardo Guevarra said that Mas, who is facing complaints on “Inciting Sedition” and violation of the “Code of Conduct” for public employees, will still be prosecuted.

Ronnel Mas, 25, admits that he posted that tweet only because he wanted to gain more followers and retweets. He clarified that he did not have P50-M nor did he want to have the President killed. | via @Nikobaua pic.twitter.com/1E98CaeOIQ

Meanwhile, Duterte, who is famous for his strongly-worded statements, just last month ordered police to “shoot dead” all those protesters who were violating government-mandated restrictions on mass gatherings. He also earlier made headlines when ordering soldiers to shoot female rebels “in the vagina”.