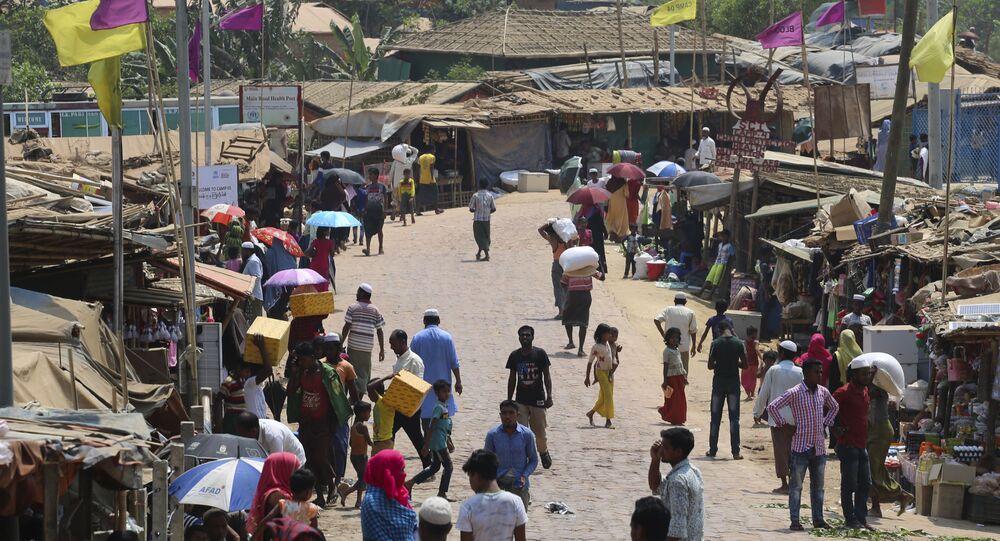 MOSCOW (Sputnik) - A fire at the Kutupalong refugee camp near the Bangladeshi city of Cox's Bazar has resulted in the destruction of more than 350 dwellings housing Rohingya refugees from Myanmar, media reported on Tuesday.

"The fire broke out from a house adjacent to the camp and quickly it spread to the adjacent shanties," Refugee Relief and Repatriation Additional Commissioner Mohammad Shamsuddoha said, as quoted by the newspaper.

According to the Bangladeshi newspaper New Age, the fire damaged a further 350 dwellings and approximately 20 people suffered injuries and received treatment at a Doctors Without Borders field hospital.

According to the UN Refugee Agency, the Kutupalong refugee camp is the largest of its kind in the world. Roughly 860,000 Rohingya refugees are currently based in Bangladesh’s Cox's Bazar district after fleeing violence and persecution in Myanmar’s Rakhine state.

© Sputnik / Shahnewaz Khan
Rohingya Refugee Movement to Be Curbed in Bangladesh - Home Minister
The number of Rohingya refugees in Bangladesh has risen rapidly since 2016, when violence broke out between militants of the Arakan Rohingya Salvation Army and government forces. A UN fact-finding mission to the country in 2018 said that there were grounds to charge Myanmar with crimes against humanity and genocide against the Rohingya people.

In January, the International Court of Justice ruled that Myanmar must fully implement all measures to prevent the murder, torture or persecution of people based on racial, ethnic or religious grounds.