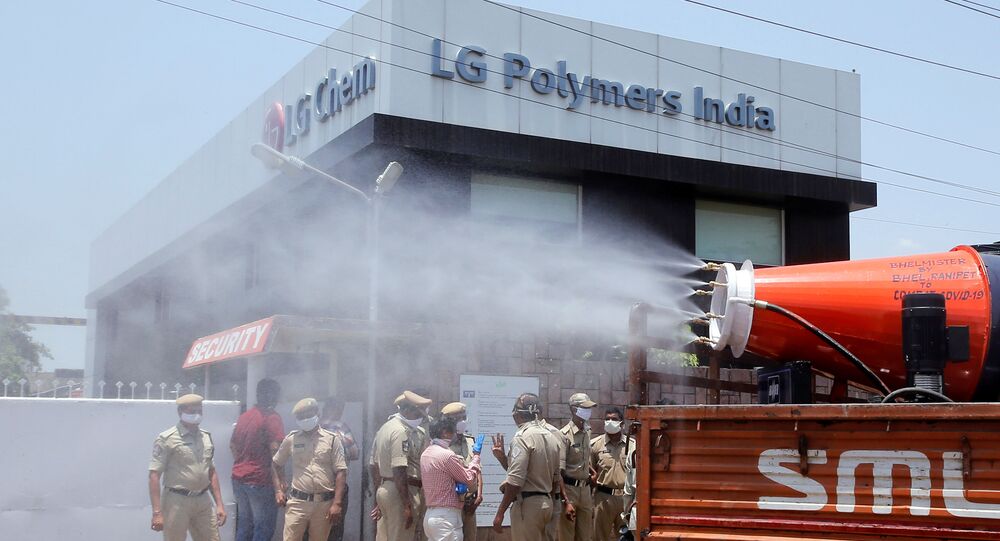 New Delhi (Sputnik): As many as 12 people lost their lives and 300 were hospitalised due to the leakage of hazardous styrene gas from a polymers factory in India's Andhra Pradesh. A rescue operation and evacuation were carried out in areas in close proximity to the factory.

India's National Green Tribunal (NGT) on Friday directed the Indian arm of the South Korean firm LG Polymers to deposit an initial amount of $6.6 million as damage compensation for the #VizagGasLeakage incident in Vizag city in the southern Indian state of Andhra Pradesh.

​The order stated that the amount is being fixed, taking into account the financial value of the company and the extent of the damage caused.

The National Green Tribunal on Thursday took suo motu cognisance of the accident, which killed 12 people and left nearly 300 hospitalised due to styrene gas leakage from a polymer plant.

Notices have also been issued to the Central Pollution Control Board (CPCB) and Ministry of Environment, Forests and Climate Change (MoEF&CC) to file their responses.

A report has also been sought from the five-member fact-finding committee that may soon visit the site of the incident for inspection and to conduct an inquiry into the causes, state the extent of the damage, and suggest precautionary measures to prevent such incidents in the future.

The leakage of the hazardous gas, styrene, occurred on Thursday from a chemical factory owned by the South Korean company LG Polymers India Pvt.

Soon after the incident, videos of people falling unconscious on roads due to the exposure to the hazardous gas started surfacing on social media. The National Disaster Response Force (NDRF) was called in to carry out rescue operations and an evacuation.