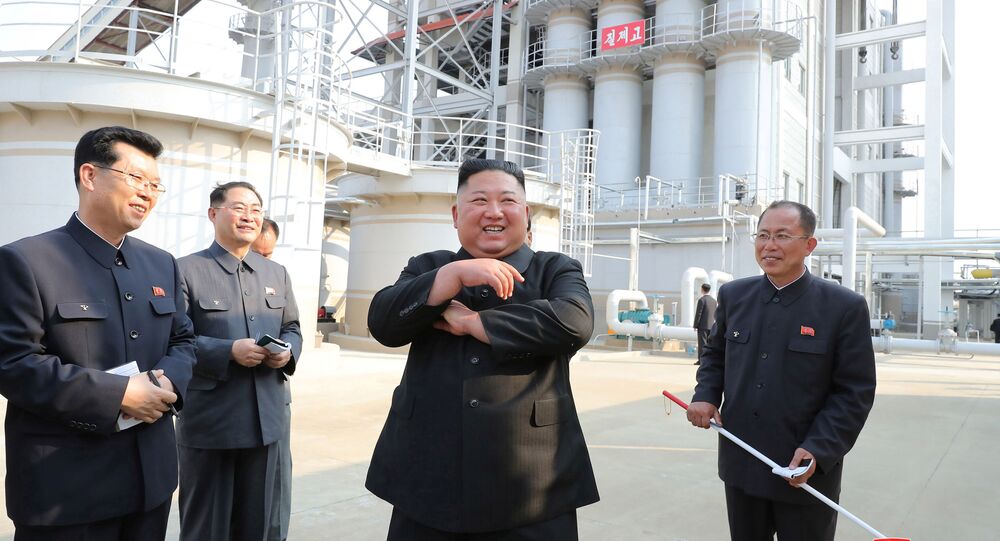 According to North Korean state media, the country's leader has appeared in public for the first time in weeks after a smattering of unconfirmed reports that he was on the brink of death after a failed heart surgery.

A fresh mark on Kim Jong-un’s arm corroborates earlier reports about his alleged heart surgery, some medical experts suggested after footage of the North Korean leader's most recent public outing was published by local media.

On Friday, the Korean Central News Agency reported that the 38-year-old on Friday had inspected a fertiliser plant in Sunchon, providing photos and videos of the visit which brought an end to his almost three-week absence from public functions.

Health professionals who examined the footage told South Korea-based NK News that Kim showed what appeared to be a mark on the inner side of his right wrist, a possible sign of cardiovascular surgery.

One US medic stated that the mark “looks like a right radial artery puncture … [which is] often used for access to the coronary arteries for stent placement”, adding that it appeared to be “about a week old”.

“It is hard to tell from the foreshortening of the photograph, but it seems a bit medial. It is not an IV [intravenous], which wouldn’t leave such a mark,” they said.

A South Korea surgeon told the outlet that the dot on Kim’s arm “looks more plausible to be a procedure or check-up mark from a procedure on a heart-related issue”.

However, a third expert, Harvard Medical School's Jason H. Wasfy, said that the placement of the mark was off for it to be a sign of a radial puncture, which is typically performed closer to a thumb and causes a hematoma.

Kim Jong-un’s health drew international interest after he missed out on the 15 April anniversary of the birthday of his grandfather and state founder, Kim Il Sung, one of the biggest days on North Korea’s calendar.

Daily NK, a South Korean website which bases its stories on accounts by defectors from the North, cited an unidentified source inside DPRK on 20 April as claiming that Kim was recovering from a heart surgery allegedly conducted a week prior because of his “excessive smoking, obesity, and fatigue”.

The following day, CNN reported that the US was monitoring intelligence that Kim was in “grave danger”, according to a government source, but South Korea played down the claims about Kim's health. Another news report from Japan then speculated that the North Korean leader was in a “vegetative state”, and a few outlets reported that he had died.

Pyongyang has not commented on the rumours, but Friday's footage from the factory visit came in apparent rebuttal of the claims.