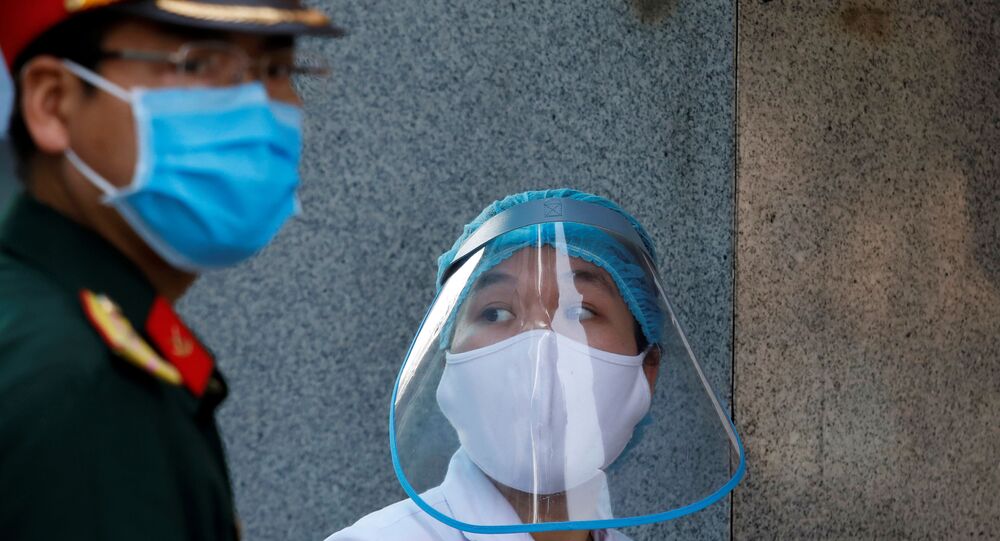 The World Health Organisation’s latest estimates put the number of confirmed coronavirus cases in Vietnam at just 270, a far cry from the situation in neighbouring China where the figure stands at a whopping 84,347.

With COVID-19 continuing to take its toll in many countries across the world, Vietnam remains one of the few nations in South East Asia and beyond that has no the virus-related fatalities, according to the World Health Organisation.

Here’s a look into how Vietnam has managed to succeed in fighting COVID-19 which has already claimed the lives of at least 4,643 people in China, Vietnam’s immediate neighbour.

This was followed by a national lockdown, which saw the suspension of all air and rail links with neighbouring China and the closure of schools and universities.

© REUTERS / Nguyen Huy Kham
A poster warning about the coronavirus disease (COVID-19) is seen on a street in Hanoi, Vietnam April 20, 2020

Vietnamese authorities also recommended that residents should install a special app on their mobile phones to monitor the COVID-19 situation, part of the government’s effort to combat the outbreak.

The situation went south in late March, when the number of confirmed coronavirus cases in Vietnam soared to more than 100, prompting the authorities to immediately react by, in particular, denying visas to all foreigners, except diplomats and other civil servants.

The government announced the closure of cafes, bars, night clubs, cinemas, as well as karaoke and massage parlors across the country, also banning gatherings of more than 20 people.

Urban traffic was minimised and areas particularly affected by the coronavirus were completely isolated as Vietnam purchased at least 200,000 COVID-19 tests from South Korea.

As of 1 April, people were allowed to leave home only for visiting a shop or a pharmacy, with military and mobile medical units deployed to fight the epidemic.

The tightening of the screws finally resulted in 225 out of 270 corona patients being discharged by the end of April amid official reports that there were no COVID-19 cases in the country.

Vietnam has reported 0 COVID-19 related deaths with 268 cases after 90+ days since the first outbreak in January.⁠
⁠
A country with over 96 million people, bordering on China, managed to contain the pandemic better than most similarly sized countries with larger economies.⁠ pic.twitter.com/MpPDWdUPLu

Some observers, however, remained downbeat on the data, referring to the alleged shortage of intensive care rooms even in major Vietnamese cities with relatively reliable infrastructure.

Pyotr Tsvetov, associate professor of the Russian Foreign Ministry’s Diplomatic Academy, said that there is no reason to question official statistics pertaining to the current coronavirus situation in Vietnam.

"The country is traditionally strong with its administrative vertical [of power] and the ability to mobilise the population. They took the fight against the coronavirus very seriously, proclaiming the slogan ‘Combat the epidemic as an enemy’, a reference to wars against aggressors”, Tsvetov emphasised.

He also pointed to Vietnam’s previous experience of fighting the SARS (severe acute respiratory syndrome) epidemic in 2003, when the country “showed the ability to curb the infection”.

He was echoed by Ho Chi Minh City resident Anastasia who suggested that the secret to Vietnam’s success in fighting COVID-19 is the public’s attitude toward the issue and quick reaction of the authorities.

“People unquestionably adhered to the rules. Everyone was at home [during the lockdown]”, she said, adding that life is already starting to get back to normal in the city.