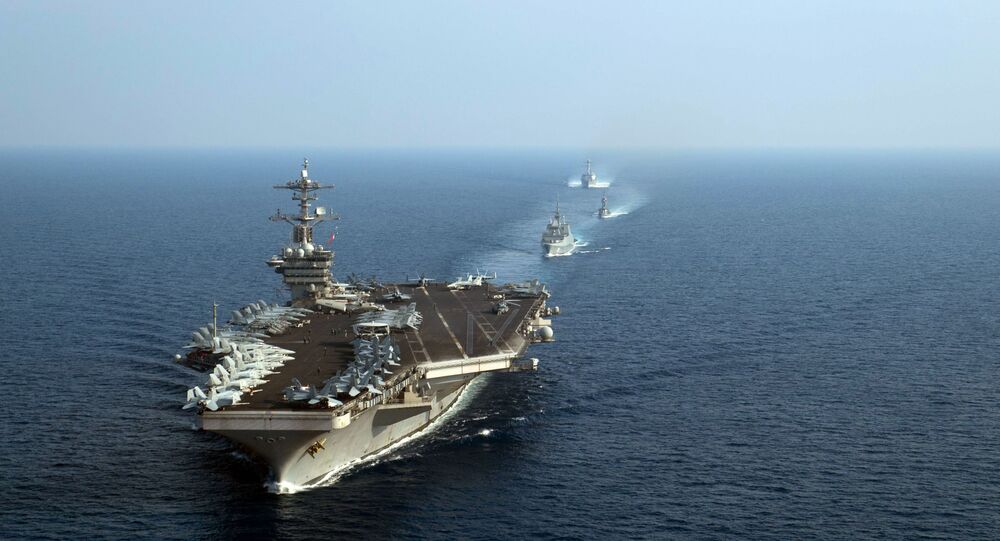 As China begins to resume regular operations amid a declining number of COVID-19 cases , the US is still battling the to break the virus' growth trend, with even the American military unable to escape its grasp.

The Chinese People's Liberation Army (PLA) conducted military drills featuring ships, submarines, and fighter jets in the disputed regions of the South China Sea in late March, when the region often sees the presence of US Navy ships, the PLA said on its website.

The PLA's forces fired live rounds, including anti-aircraft, anti-ship, and anti-submarine amunition as well as practised replenishment at sea and fleet navigation.

The waters of the South China Sea, disputed by 5 countries and Taiwan but mostly controlled by Beijing, are often visited by US Navy ships that claim they're conducting freedom of navigation operations. During these visits, US destroyers and aircraft carriers sometimes come close to islands hosting Chinese military installations, despite constant demands by Beijing to stop such "provocations".

At present, the waters in the South China Sea are free of the US presence because the country's Navy is struggling to contain the coronavirus pandemic which has affected some American military vessels. The USS Theodore Roosevelt, one of the most recent US ships to visit the South China Sea, reported over 170 cases of COVID-19 infections with its captain, Brett Crozier, sending letters to his command urgently requesting assistance to combat the outbreak. These letters, however, only resulted in his demotion after they were leaked to the public.

Another US ship involved in operations in the Pacific, the USS Ronald Reagan, has been stationed in a Japanese dock undergoing maintenance with its crew also reporting several cases of COVID-19, while the exact numbers remain unclear.

The temporary impairment of some US Navy assets might not influence the American military's operations in the region after all, suggests Dr Jay Batongbacal, director of the University of the Philippines Institute for Maritime Affairs and Law of the Sea. He indicates that the US Navy has other assets available in the Pacific region, such as its destroyers, to continue freedom of navigation operations in the disputed waters. The expert notes, however, that there are "political" implications of the outbreak on the USS Theodore Roosevelt.

"The fallout from the infection and the handling thereof does not publicly speak well of the US [Navy's] actual ability to handle the pandemic on its own ships, which in turn reflects the US government's currently controversial and hotly debated efforts to address it back home", Batongbacal said.

Tong Zhao, a fellow at the Carnegie-Tsinghua Centre for Global Policy in Beijing, in turn, suggests that the US Navy might reevaluate the necessity of running operations in the South China Sea during the pandemic, taking into consideration their price tag and overall effectiveness. The latter has arguably been lacking even before the coronavirus emerged, the pundit points out.

"Some [US experts] argue it is hard to prove whether such operations have indeed deterred or prevented China's military provocations. They believe there may be a need for the US military to focus on countering the pandemic and protecting its sailors for the moment and at the same time think about a longer-term strategy to more effectively push back against China's military operations in the region", Tong Zhao said.