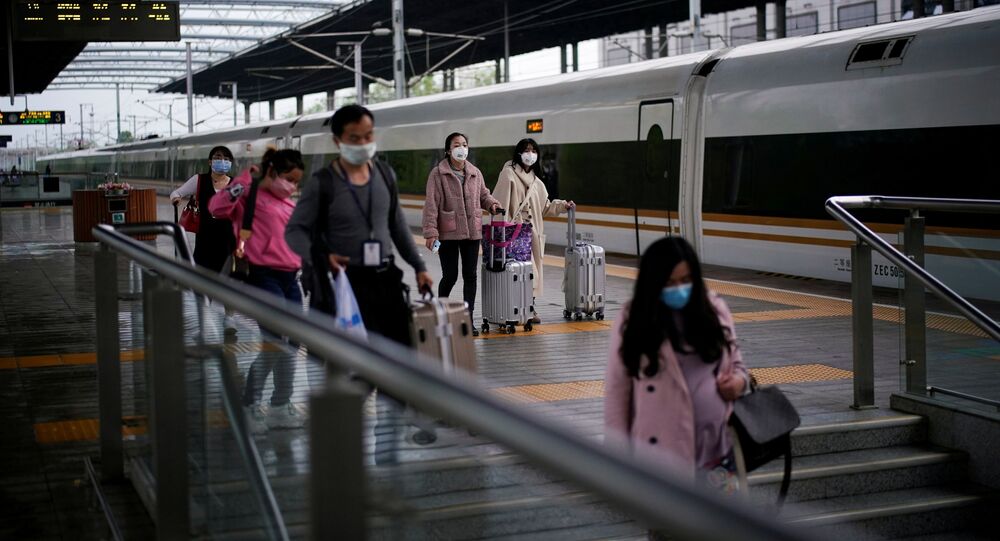 Huge crowds of people crammed trains and buses in China’s Hubei province - the first epicenter of the COVID-19 coronavirus outbreak - on Wednesday as travel restrictions were lifted following a strict two-month lockdown.

According to AFP reporters, there were long lines of people with suitcases at the railway station in the city of Macheng in Hubei as people waited to board trains.

Children were seen wearing masks, and guards directed throngs of people to maintain order at the crowded train station. In addition, migrant workers in the city of Huanggang were seen waiting for long-distance coaches while carrying bags and suitcases. People are now allowed to travel in and out of Hubei as long as they have a QR code from authorities signifying that they are healthy.

One worker said that he was returning from Huanggang to Wenzhou in the eastern Zhejiang province. "I have been at home in Hubei for more than two months," he added.

While railway stations and airports in many parts of China started reopening Tuesday, transportation is still restricted in Hubei’s capital of Wuhan, where the virus was first detected late last year.

Guo Wei, a teacher who works in Beijing, also told AFP that she was traveling back home to the city of Macheng in Hubei, which she hadn’t been able to do since the start of the coronavirus outbreak. "It's been too difficult!" she told AFP.

Despite the fact that travel restrictions have been lifted in many parts of China, schools remain closed. In addition, the Chinese National Health Commission on Wednesday reported that there were 147 new cases of people being infected with the coronavirus overseas and traveling back to China with the infection, bringing the total current number of imported infections in China to 474.

As China slowly begins to open up, most of the rest of the world has shut down. According to a report by the Guardian, around 1 in 5 people in the world are under lockdown as the coronavirus pandemic continues to accelerate. In the US, around 40% of the population is under lockdown restrictions. The UK became the latest European country to initiate a nationwide lockdown on Monday, following similar moves by Spain, France and Italy.

The latest data by World Meters reveals that there are more than 453,000 cases of the virus worldwide and that more than 20,000 people have died as a result. After China, which has largely contained the virus, Italy, the USA and France are facing the highest total number of cases.

Netflix Users Report Service is Down in Europe Amid Coronavirus Quarantine