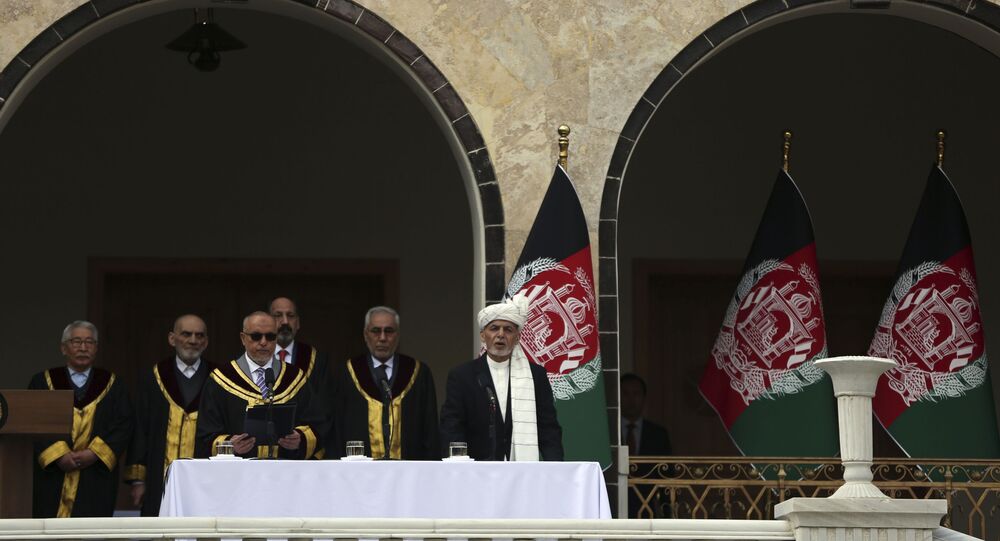 KABUL (Sputnik) - Ashraf Ghani was sworn in as the Afghan president at a ceremony at the presidential palace in Kabul earlier today, while his rival Abdullah Abdullah held a parallel inauguration ceremony, defying his opponent.

Two rockets were fired on Monday at competing inauguration ceremonies of the elected Afghan president and his rival in Kabul, hurting two people, a source in the presidential palace told Sputnik.

"Two rockets hit on the outskirts of Zarangar Park and Serena Hotel and two people got injured," the source said.

One rocket hit near the presidential palace as President-elect Ashraf Ghani was speaking. He has been declared the winner of September’s election, prompting ire from his main opponent Abdullah Abdullah, who held a simultaneous swearing-in.

Meanwhile, Daesh* claimed the responsibility for the rocket attack, in a statement quoted by Reuters.

Ghani took an oath during a ceremony at the Presidential palace in Kabul in the presence of international representatives, including Zalmay Khalilzad. Amrullah Saleh and Mohammad Sarwar Danish were subsequently sworn in as his deputies. In his first presidential decree, Ghani extended their power and privileges.

In a separate inauguration ceremony at approximately the same time, Abdullah proclaimed himself president and took an oath, which apparently means that mediation efforts by Khalilzad – including a lengthy negotiation marathon overnight – failed to build consensus between the rivals in a bid to avoid a split government.

The presidential vote in Afghanistan took place on 28 September. The announcement of results was postponed repeatedly due to an audit of votes in several provinces.  It was not until February that the Afghan election commission announced that Ghani had won by a slim majority of 50.64 percent, an outcome that Abdullah rejects.