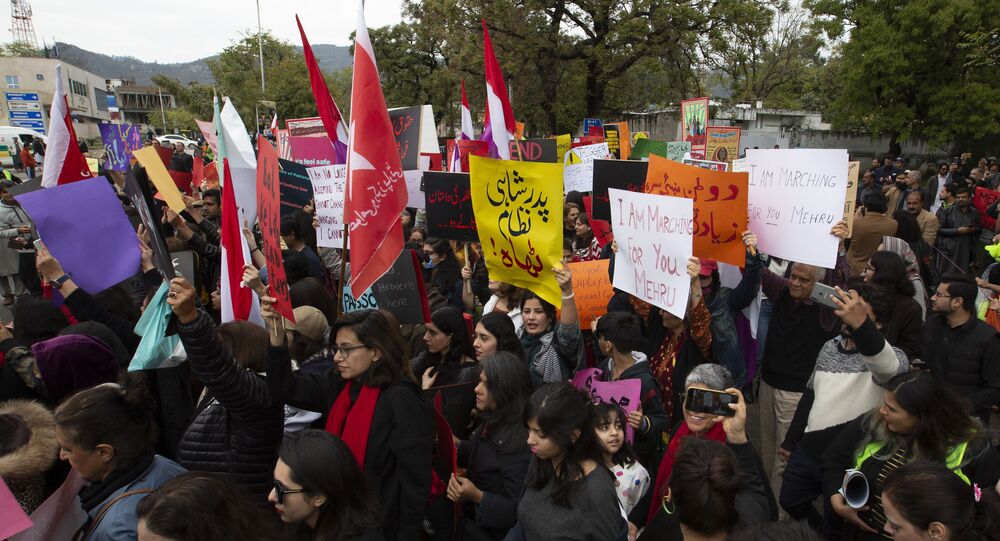 New Delhi (Sputnik): Pakistani women in their thousands took to the streets in Islamabad, Karachi, Lahore, Quetta, and Sukkur on Sunday to mark the Aurat Azadi March (Women's Freedom March).

The Aurat Azadi March in Islamabad was allegedly attacked by the religious parties on Sunday.

​According to the Pakistan news website The Dawn, one person from the march sustained an injury while the situation was brought under control by the police.

"Men from religious political parties, who were protesting against the march, started pelting stones at us, they were throwing shoes, sticks. They beat up people from the march. Chillies were thrown at a woman's face. But we did not back out and we are not going to back out," Tooba Syed one of the participants, said.

The International Women's Day march has has faced condemnation from the religious parties for making 'indecent' demands.

The first such march was organised in 2018 in Islamabad and Lahore.

Women in Pakistan are demanding access to public spaces, more representation at work, freedom to wear clothes of their own choice and more rights over their properties.

Stating these demands to be against the Islamic culture, extreme religious parties including Ahle Sunnat Wal Jamaat and Jamaat-e-Islami demonstrated in Islamabad, claiming women don't need rights over their own bodies.

The marches in other cities were concluded peacefully. In Lahore city, a resolution condemning under-age marriages and demanding that women be granted legal, social and economic protection was submitted in the Punjab Assembly.