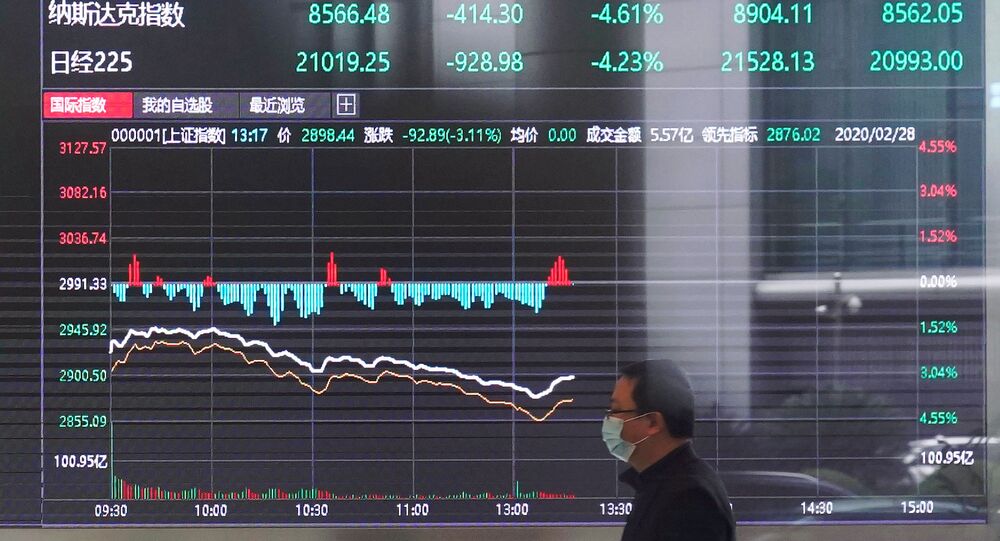 On Wednesday, the International Monetary Fund (IMF) announced a multi-billion dollar aid package for emerging market countries to fight the impact of the coronavirus. Following the news, the Dow Jones Industrial Average skyrocketed, while Chinese and some other Asian stocks also saw significant gains.

The Shanghai Stock Exchange Composite Index gained 1.99% on Thursday, reaching 3,071.68 points, according to Bloomberg data. This marks the index’s highest level since the start of February, when it plummeted to less than 2,800 points. The Shenzhen Component Index also gained around 1.9% over the course of the day.

Meanwhile, stocks outside mainland China have also showed a positive dynamic. In the final hour of trading, the Hong Kong Stock Exchange’s Hang Seng Index grew by over two percent, to 26,768.

This came after the Dow Jones Industrial Average managed to gain nearly 1,200 points on Wednesday. Earlier, the Federal Reserve cut US interest rates by half a point amid hysteria around the Covid-19 outbreak.

© REUTERS / Aly Song
‘Nasty Corona’: Gold Rushes to Record High, Stock Markets Crash – Experts on Coronavirus Impact
However, many suggested that the developments were likely to be linked to the IMF’s announcement that it would issue a $50 billion aid package to fight the coronavirus, with the money primarily being allocated to low-income and emerging market countries, to support their healthcare systems and fiscal stimulus programmes.

The coronavirus, which initially originated in the Chinese city of Wuhan at the end of 2019, has been closely monitored by investors. About 97,000 cases of the virus have been confirmed around the world so far, while more than half of the infected people have already recovered from the illness.