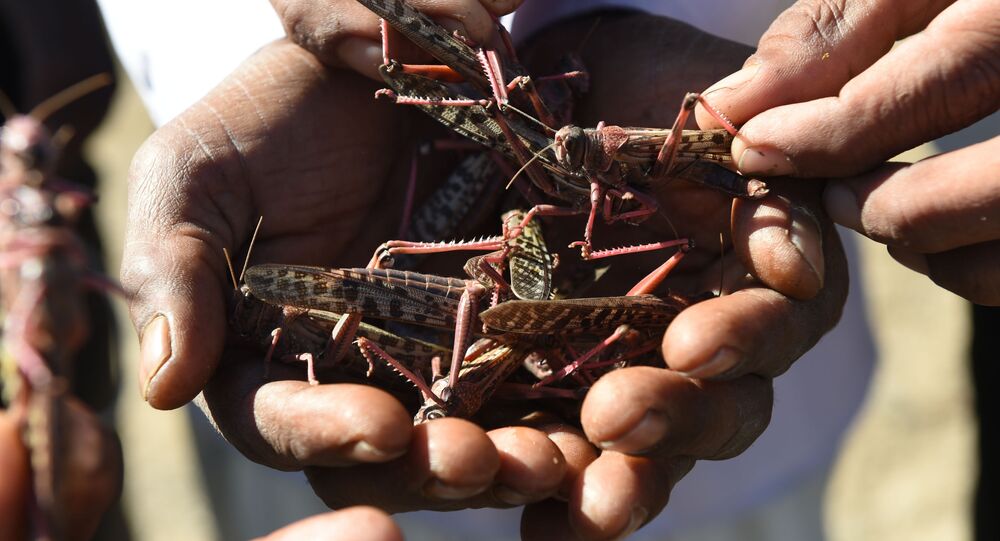 China’s National Forestry and Grassland Administration has apparently urged local authorities to step up their monitoring efforts in the face of a potential locust threat.

The ongoing locust infestation in Pakistan may not bode well for its neighbor China as swarms of voracious insects might possibly threaten the country’s southern regions.

According to China Daily, Zhang Zehua, a researcher at the Institute of Plant Protection of the Chinese Academy of Agricultural Sciences, pointed at Yunnan and Sichuan provinces, along with the Guangxi Zhuang autonomous region, as the most likely targets of insects predations.

"It is extremely unlikely that desert locusts will directly migrate into China's inland areas, but if the overseas desert locust plague persists, the probability of locusts entering China in June or July will sharply increase," he explained.

Zhang noted, however, that he believes the desert locust won’t immediately pose a threat to the country’s agricultural production due to China’s prevention system.

On 2 March, the Chinese National Forestry and Grassland Administration also urged local authorities to “step up monitoring of the pests, issue early warnings and alerts in a timely manner, strengthen staff training, and devise and improve emergency response plans” in order to prevent the possible spread of locusts, the media outlet adds.

"Cross-region communication and cooperation should be strengthened to further enhance exchanges on information and technologies on desert locust prevention and control," a notice issued by the administration reportedly said.

The rampaging locust swarms have already led he Pakistani authorities to declare a national emergency as the outbreak, deemed the worst in two decades, has battered 40% of the crops there.

The UN has warned that this could threaten 25 million people in Sudan with food shortages.