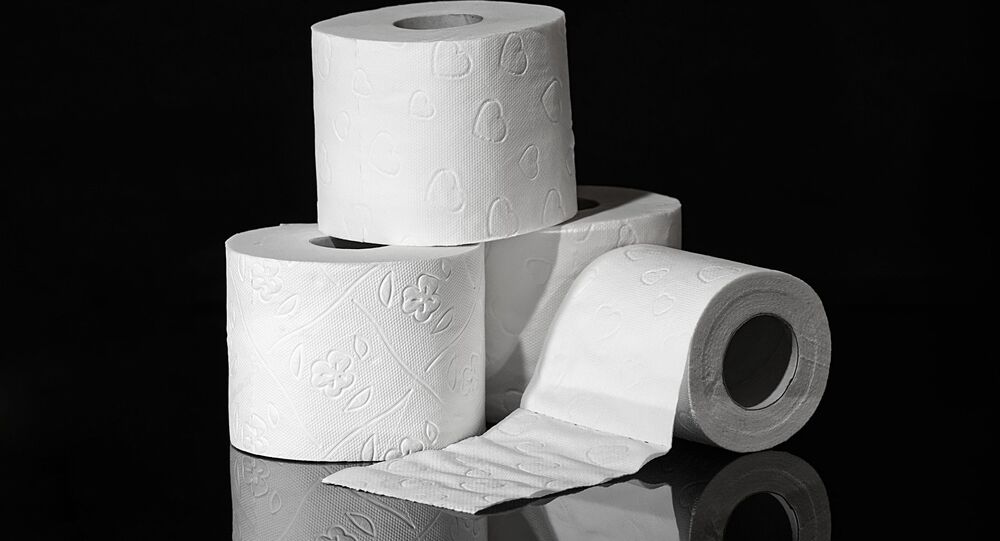 Consumer Panic Over Coronavirus in Japan: Are Lack of Toilet Paper & Subway Rows Only the Beginning?

A month ago, no one would have believed that a new coronavirus would cause panic in such a civilized and developed country as Japan: stores have run out of toilet paper and napkins, and people have been brawling due to a lack of medical face masks.

Consumer panic due to the novel coronavirus in Japan has escalated to such an extent that the country’s Prime Minister Shinzo Abe had to speak out in a bid to urge people not to believe the rumours that there’s not enough toilet paper in the country.

But the fact is that it’s quite difficult to find toilet paper in Tokyo stores, while the tension and anxiety among citizens is growing.

Eleanora Shumilova, a Sputnik correspondent in Tokyo, has visited several stores in the Shirokane and Shinjuku districts and found no toilet paper there. Other personal care products such as soap and disinfectants, including anti-bacterial fluids and hand sanitizers, have also started disappearing from store shelves.

Searching for those responsible for fomenting panic and attempts by the authorities to reassure citizens hardly changes anything: people are afraid of uncertainty and are trying to be prepared for any surprises. And the question is not whether it is possible to stop the unhealthy frenzy over the lack of toilet paper, but what happens next.

And it’s not just that people are massively buying basic necessities – the coronavirus has already triggered outbreaks of xenophobia and even a street fight and rows on the subway.

How Did It All Start?

As a result, by the weekend, virtually all stores had run out of toilet paper and napkins.

“At the moment no one knows what to do, everyone is confused and concerned, therefore they want to buy basic necessities for future use, and many are buying toilet paper. If you don’t buy it now, everything will be sold out soon,” a seller at Tomod’s drug store explained.

At the same time, the seller wasn’t able to answer the question whether there will be toilet paper in stock on Monday:

“Cars with cargo arrive every day - from Monday to Friday. However, we don’t know whether the goods will arrive on time. For example, if on Sunday a highway is blocked due to a marathon, cargo trucks won’t be able to drive through, which may affect their arrival time on Monday. Moreover, it’s possible that toilet paper will be sold out as soon as it hits the shelves”.

It can be noticed in stores that people also buy quite a lot of feminine pads and tampons, as well as household detergents, although not as much as toilet paper, paper towels, napkins and cotton wool.

Paradoxically, the increase in consumer activity could be triggered not only by alarmist messages on social networks, but also by demand stimulation on the part of stores themselves. For example, the "Can do" one price store has a sign explaining how to make a face mask of paper towels to “protect” people from the virus.

© Sputnik / Eleonora Shumilova
"Can Do", one price store

The authorities and toilet paper manufacturers have tried to assure the citizens that there would be no disruption in supply, as well as saying that the main production plant for toilet paper was in Japan, not in China. However, keeping in mind the 2011 tragedy – the earthquake and tsunami in northern Japan, many decided to play it safe. After all, many remember the crisis caused a shortage of essential goods.

“Human Psychology is the Same Throughout the World”

It’s undeniable that the events in China are starting to significantly affect the economic situation in Japan. Since factories in China have suspended work, a wide variety of products, especially technological ones, are delivered with a significant delay. Japanese manufacturers are also dependent on China, as they use Chinese hardware.

But all these objective reasons for concern over goods shortage and rising prices don’t make the situation less absurd, neither do they explain why people (not only in Japan, but all over the world) are reacting so sharply to the coronavirus epidemic. Despite the apocalyptic messages in some media and social networks, the majority of available sources provide statistics which says that the mortality rate due to the coronavirus is about 3 percent.

Of course, the coronavirus is especially dangerous for people with a weak immune system… like any other virus. Currently, 3,000 people have died from the coronavirus, while the flu results in 290,000 to 650,000 deaths annually. But why does the coronavirus cause fights in public places or panic in stores?

“There is such a mental illness as carcinophobia, a fear of getting cancer. Any expert arguments fail to convince those suffering from carcinophobia that their fears may not be substantiated. In a state of psychological panic people still follow the attitudes that fear has put in their minds. With the coronavirus, people unknowingly focus on the so-called probability theory. No matter how civilized a country is, human psychology is essentially the same throughout the world", Alexander Lebedev, professor at the Institute of Psychology of the Russian Academy of Sciences, explained.

Lebedev continued by saying: "Moreover, there is such a term as flocking, which is associated with actions of animals and other living organisms when in panic. This amazing natural phenomenon is most noticeable among birds, when thousands of them stray into huge flocks. At the same time, no one can understand the logic which makes them fly in one direction or another. This is still a mystery. When in panic, people behave in a similar way. Figuratively speaking, a 'flock' or crowd quickly forms, engaging more and more people who join it driven by their instincts".

Meanwhile, Anastasia Vorobyova, Candidate of Psychological Sciences, senior researcher at the Laboratory of Social and Economic Psychology at the IP RAS, has suggested that there have been similar situations of panic buying in world history, for example, in Russia, when there was a comparable frenzy over salt and buckwheat.

“Someone starts a rumor that there's a shortage of certain goods, that their supplies will soon be ceased, etc. Rumors arise in situations of anxiety, uncertainty, lack of information, a critical mass of alarmists in the society. Such speculations are often used to raise the prices of the remains of high-demand goods and get excess profit", she said.

Psychologists have also tried to provide reassurance that the human psyche is such that panic cannot last for too long.

“Japan has excellent healthcare, they take all the necessary safety precautions, so I think this panic will end soon”, Lebedev concluded.