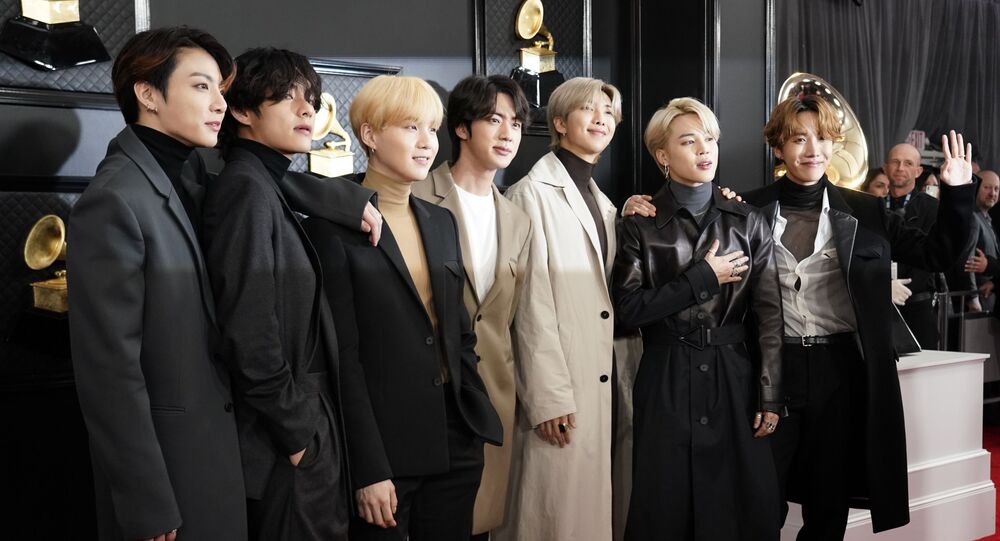 BTS continue to make history with their new album “Map of the Soul: 7” and are closing in on records set by the Beatles.

"Map of the Soul: 7" released more than a week ago, reached the top Billboard 200 chart on 2 March, and now occupies the 8th spot on the biggest chart in the US.

Bangtan Boys began making appearances on the Billboard chart with their 2018 release "Love Yourself: Tear", followed by "Love Yourself: Answer" from the same year and "Map of the Soul: Persona" in 2019. So far, four of the ten non-English language albums to top Billboard belong to BTS.

Only one other band has ever had four albums top Billboard in such a time span: the Beatles. The British band had "Yesterday & Today" and "Revolver" in 1966, "Sgt. Pepper’s Lonely Hearts Club Band" in 1967, and "The Magical Mystery Tour" in 1968. For BTS it took a little longer than the Beatles' year and five months - one year and nine months.

The world's most famous K-pop band showed off their power not only in the United States but also on the European continent where they occupied first place on the German, French, Dutch, and Irish charts. The UK's Official Charts announced that "Map of the Soul: 7" had grabbed No. 1 on its albums chart on 28 February as well.

The Army (the official name of the fandom) has flooded Twitter with comments about their idols achieving such a feat.

the record which stood for 50 years broken by BTS today as fastest and second group in history after beatles to get #1 in bb200 with 422k sales, when i say they are living legends and makes me proud every time i'm so happy🎉💜 #7BillboardNo1Album #BTS422KDEBUT #BTS4thNo1Album pic.twitter.com/iRn2blr1hN

Hey debut bts, you might laugh at me but I just thought I would let you know anyways, you just broke the Beatles’ record for the fastest group to have 4 no1 albums, it will be okay hang in there 💜 https://t.co/qWaamo2fKI

bts and mots7:
- fourth #1 on the billboard 200 in less than two years
- fastest four consecutive #1 albums since the beatles
- highest debut sales so far this year with 422k units, 347k pure
- beat the first-week sales record this year by pure sales alone pic.twitter.com/hEkbzaU39z