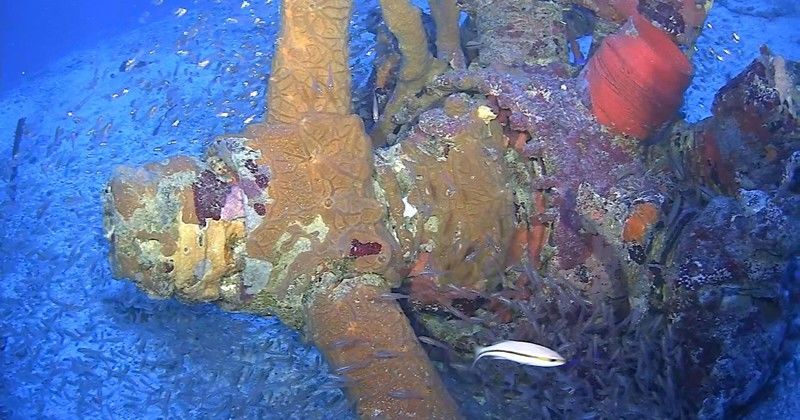 A US charity for repatriating the remains of US soldiers has recovered three aircraft from a World War II battle site in Micronesia and discovered the final resting place of seven naval aviators.

Inside of a protected reef in the Federated States of Micronesia sit the remains of dozens of US service members who perished during the 1944 battle to seize the lagoon from Japanese forces. Earlier this month, Project Recover, in conjunction with the University of Delaware and Scripps Institution of Oceanography at the University of California, San Diego, announced they had identified seven of those fallen when researchers found their three attack aircraft on the seafloor.

Operation Hailstone in February 1944 was a massive, aerial bombardment of Japanese imperial fortifications surrounding Chuuk Lagoon, sometimes called Truk Lagoon, a huge natural harbor in the Caroline Islands that serviced the Imperial Japanese Navy’s largest warships. According to Military Times, the US lost at least 33 aircraft and 100 service members in the operation, which succeeded at softening Japanese defenses.

US National Archives
Japanese shipping under air attack in Truk Lagoon, as seen from a USS INTREPID (CV-11) aircraft on the first day of raids, 17 February 1944. Dublon Island is at left, with Moen Island in the background. Four of these ships appear to have been hit by this time.

Twenty-three of those lost were naval aviators. However, Project Recover has found three of the planes: two SBD-5 Dauntless dive bombers and one TBM/F-1 Avenger torpedo bomber that flew from the aircraft carriers USS Enterprise and USS Intrepid.

“Finding these three aircraft was only possible with the dedication and tireless efforts of our team members and the support of the host country,” Mark Moline, co-founder of Project Recover, expedition leader and director of the School of Marine Science and Policy at the University of Delaware, said in a February 14 press release. “While the discovery of these sites is exhilarating and validating, these feelings are mixed with the humbling emotions of the sacrifices made by these service members and their families in protecting our freedoms.”

Project Recover
Tail section from an SBD-5 Dauntless dive bomber resting on the floor of Chuuk Lagoon.
Project Recover
Propeller from a TBM/F-1 Avenger torpedo bomber in Chuuk Lagoon, as photographed by a remotely operated vehicle.

The discovery is the result of four expeditions between April 2018 and December 2019 totaling 50 days on the water. The researchers scanned the seafloor with sonar and used underwater robots tethered to surface boats to investigate possible wreckage sites.

“[These vehicles are] able to look at large areas in fine resolution. When these aircraft crash into the water, they don’t look like aircraft anymore,” Moline noted. “Most of them are piles of metal that don’t rise very far off the bottom [of the ocean]. The exception is the propeller, usually sticking out.”

“We will stare at these images all day long and the wreckage that we find in order to be able to identify these airplanes based on very small pieces and parts,” Project Recover lead historian Colin Colbourn said. “And for these particular aircraft, we got really fortunate that within this lagoon, there are only two SBDs that were missing with MIAs in the exact area that we located them.”

However, Project Recover President and CEO Derek Abbey, a retired US Marine aviator, cautioned there could be more than two dozen aircraft still missing in Chuuk Lagoon, associated with 103 persons missing in action (MIA).

Google Earth
Chuuk Lagoon, in the Federated States of Micronesia

“Even though we are focused on finding aircraft, the aircraft really aren’t our interest,” said Moline. “We are only doing this to return and identify MIAs. That’s really our core mission. The main headline is bringing our guys home.”

Colburn noted that roughly 72,000 US service members were listed as missing in action at the end of World War II.

Similar efforts to discover the final resting places of other US service members continue across the Pacific Ocean. In 2019, the wreckage of the sunk American carrier USS Hornet was discovered east of the Solomon Islands, and the escort carrier USS St. Lo, the first American ship to succumb to Japanese “kamikaze” suicide aircraft, was found on the edge of the Phillippine Trench.