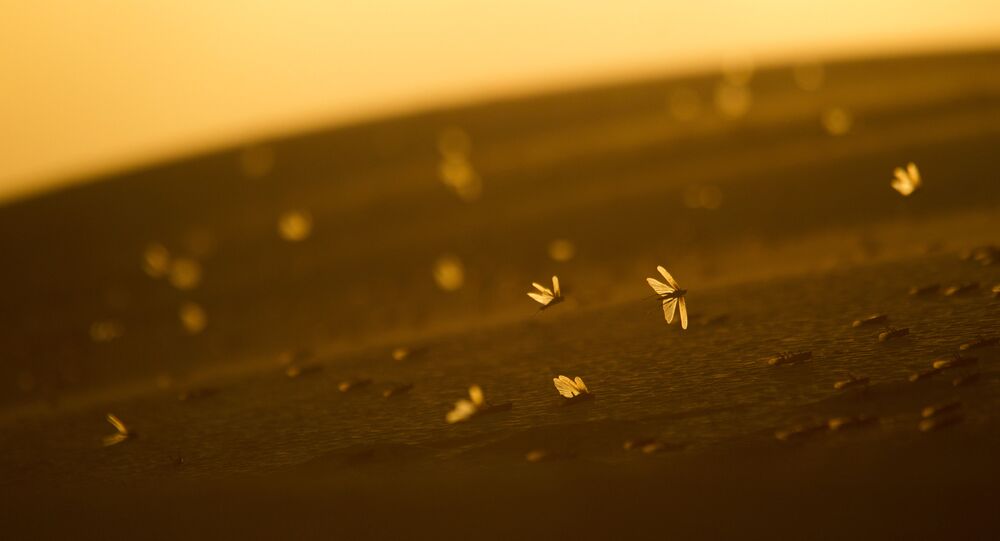 A locust swarm has descended on the country’s Punjab province, the main agricultural region, along with cities across the Pakistan-India border. Around 40 percent of crops were destroyed on farmland in Karachi and other towns in Pakistan's Sindh province, according to Zahid Bhurguri, general secretary of the Sindh Chamber of Agriculture.

Following the infestation that first appeared in November of last year, the likes of which was last seen in Pakistan in the 1990s, the government has declared a national emergency over the locust invasion that has destroyed crops of cotton, wheat, maize, tomatoes, etc.

The locust are now in Saudi Arabia. Heading towards India and Pakistan. #NukeTheLocust pic.twitter.com/uYkGBij4ae

The locust crisis hitting the agriculture sector in Pakistan comes as flour prices skyrocketed by 15 percent in January 2020 and sugar prices doubled compared with last year.

The locust invasion has made things all the more daunting for Khan, as for the fiscal year 2018-19, the harvest rose to only 0.5% to 25.195 million tonnes. The current crop loss due to locust invasion is expected to cripple the food sector in Pakistan for the upcoming several months.

More than 8,000 hectares of land have been treated with pesticides so far to deal with the locust invasion in Pakistan, as per the United Nations Food and Agriculture Organisation (FAO).

Similar locust swarms wreaked havoc in Pakistan in 1993 and 1997 as well, but this one is believed by some to be major, with previous ones pale in comparison

Facing severe criticism over the inability to control food prices, Imran Khan called for an immediate probe into flour and sugar price hikes and measures to provide relief from the ongoing crisis.

The PTI government today announced various measures under a relief package to counter inflation. A sum of Rs. 10 billion will be allocated to state-owned utility corporation stores to provide household commodities like rice, sugar, flour, pluses at subsidised rates to people.

The government will also support 50,000 units of tandoor, mud ovens used to make breads that will provide food at basic prices for people.

The record-breaking inflation became a topic of discussion in Pakistan’s National Assembly yesterday as opposition parties blamed Khan for the rise in prices and the economic crisis, while calling him “incompetent”.

Analysts are blaming the inflation on dodgy estimations about agricultural produce, mismanagement, hoarding, as well as illegal profit-making suppliers and dealers.

The cost of food, along with the food shortage, had been expected to rise due to the depreciation of the rupee and increase in utility prices, which came as part of a $6bn IMF programme approved last year.

Wheat flour, a dietary staple, contributes up to 72 percent of Pakistan's daily caloric intake, with per capita wheat consumption of around 124 kg per year. To meet the demand, Khan’s administration approved the import of 300,000 tonnes of wheat to end the prevailing wheat crisis on 20 January. The government also approved the import of 300,000 tonnes of sugar through the private sector on 7 February.

The global business intelligence Economist Intelligence Unit (EIU) revealed that consumer inflation in Pakistan will remain elevated in the near future.