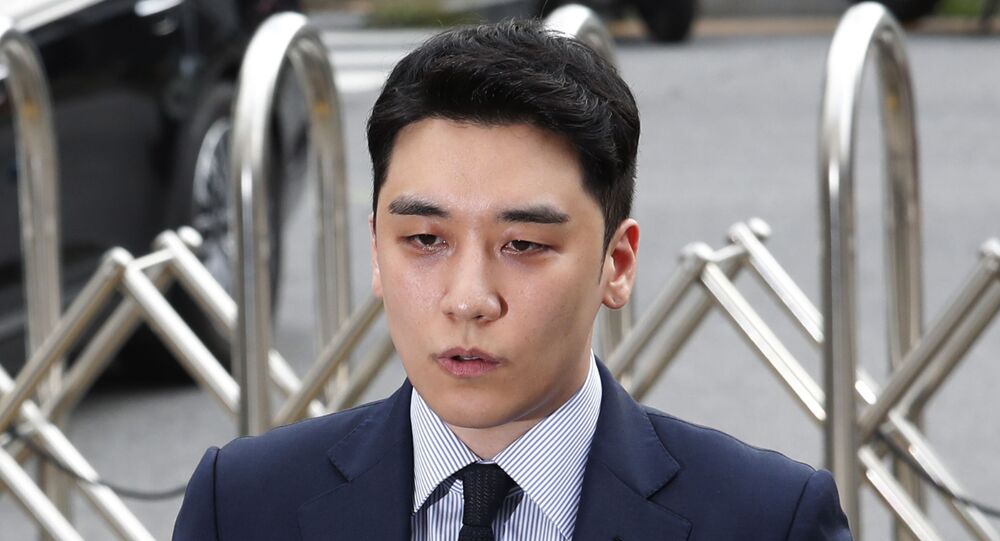 The former K-Pop star and another defendant of the case, Choi Jong-hoon, have not gone to jail, as the Burning Sun trial remains in process.

South Koreans are divided in their opinion regarding charges brought on the January 30 against a former member of legendary K-Pop boy band BIGBANG, Seungri (real name Lee Seung-hyun) who is accused of allegedly organising prostitutes, habitual gambling, and illegal foreign currency trade.

Prosecution twice requested a pretrial detention warrant on seven charges, in May 2019 and in January 2020, and both times it was dismissed due to insufficient evidence.

Twitter users were outraged that he was indicted without detention.

seungri's fans are standing by him outside his jail cell? just go in with him 👍 #StandBySeungri pic.twitter.com/fsRxg8Mfo0

all i gotta say is seungri jail. have a good day. 😚. pic.twitter.com/wRady2vabh

god i am TIRED of this shit just send seungri to jail now #StandBySeungri pic.twitter.com/XScRn9kN2M

Seungri has to go to the fucking jail so that justice is done for all the victims that there were and may be in the future https://t.co/goh79PEY9J

While others say that, without evidence, Seungri cannot be accused and the whole situation is ridiculous.

one day u see BigBang on ur Yt recommendations the next day you become a VIP; u thought you’d just be a normal fangirl but the next thing you know you became an Investigator and a Lawyer (not complaining tho) #StandBySeungri https://t.co/QJCr2JMjJj

You deserve the best, I love you forever #StandBySeungri pic.twitter.com/IkOKv4CU8r

The strongest person in the Kpop industry and the history will mention him #StandBySeungri pic.twitter.com/9MlnTz8EYx

c’mon why are some being blind still blaming seungri, y’all don’t really care about what happened to those girls, the whole case, or justice AT ALL y’all are just HATERS #StandBySeungri #SeungriTruth https://t.co/2rPNazs9p7

Together with Seungri, bribery charge without detention were brought against another participant in the case - former leader of the South Korean rock band F.T. Island, Choi Jong-hoon. The charges appeal to February 2016, when the artist was caught driving drunk. According to the investigation, Choi attempted to bribe a police officer.

The artist was also sentenced to five years in prison for a first instance in November 2019 for sexual assault. He appealed his sentence in December 2019.

The Burning Sun scandal, named for a nightclub in Gangnam, Seoul, remains at the top of Korean and international prominence, as it involved celebrities and business leaders, while also - for the first time - shattering the "perfect" image of K-Pop stars.

The scandal begun in January 2019, when MBC Newsdesk reported the November 2018 assault of a male clubgoer, Kim Sang-kyo, at the Burning Sun, by the staff member. Kim Sang-kyo claimed he was trying to help a woman who was being sexually harassed but was misunderstood and assaulted by club employees. His case came into media prominence in January 2019, after he posted a petition on the Blue House website asking for justice for being assaulted.

After Korean media began to closely cover the issue, awful details at the hands of the club management surfaced and triggered an investigation into illegal drug, intoxication of female clubgoers with the help of the staff, and sexual harassment. Police corruption at the station responsible for the area where the club was situated included prostitution and gambling. The suddenly high-profile case was primarily due to Seungri's affiliation with the club, as he was on the board as a creative director. Seugri denied all allegations of being aware of prostitution and gambling. He announced that he was willingly cooperating with the investigation and then retired from the entertainment industry.

The case continued, as a number of K-Pop stars including Choi Jong-hoon and singer-songwriter Jung Joon-young became involved. During the investigation it became known that they were members of Kakao Talk messenger chatrooms where Jung Joon-young reportedly shared secretly filmed sex videos. According to a court judgement, there were at least 10 victims and about 14 recipients of the illegal materials in private chatrooms.