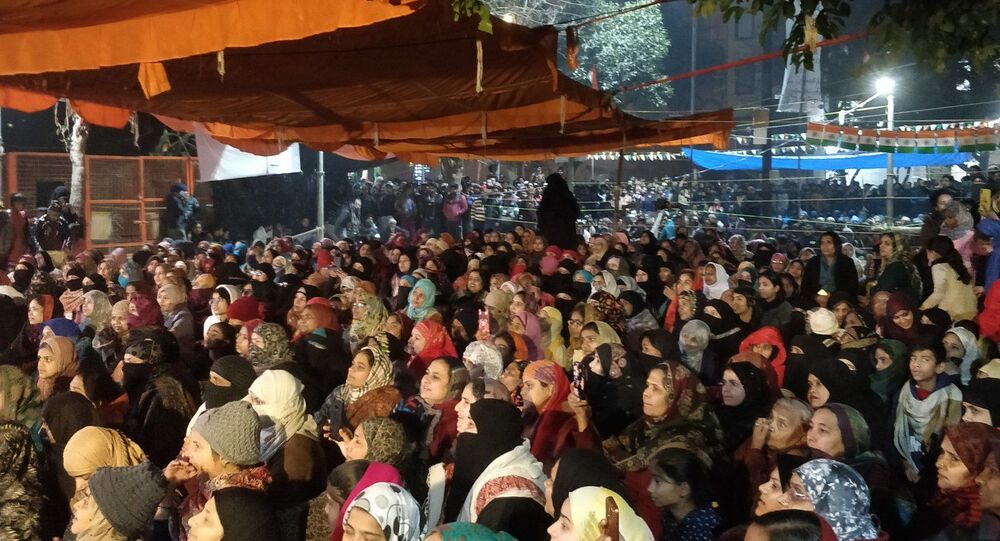 New Delhi (Sputnik): Protests against a contentious citizenship law continue unabated in India, and one that stands out, is at Shaheen Bagh in the south-east part of the national capital. Women, mostly Muslims from neighbouring colonies have taken the lead in the sit-in against the law inspiring many other groups to come out against it.

Fifteen kilometres away from Shaheen Bagh, over 500 people, including students and women have pitched tents in Gandhi Park as the venue of their protest against the Citizenship Amendment Act, 2019 (CAA). “Shaheen Bagh Yahin Banayenge”, (We will erect a new Shaheen Bagh here), slogans blared through loudspeakers despite the heavy deployment of police in the usually calm and posh neighbourhood of Saket and Malviya Nagar.

The protest which was initially started by a handful of people from outside the area was later joined by locals after "getting inspired by their enthusiasm". Besides actively participating in the agitation, the locals are also feeding the protesters and generally providing food, refreshments and bedding to the women, who sleep in makeshift tents, braving the chill of the unusually cold Delhi winter.

The protest, spearheaded by women, has been joined by people of all groups ranging from school-aged children and veil-clad women, who had until now stepped out of their homes only with their husbands.

A 10th standard student Saba Firdaus, who has her career-defining high school exams approaching in a months’ time, spends her nights at the protest camp at Gandhi Park and studying in the morning hours. The teenager has taken “medical leave” from her school to take part in the protest as it is a "crucial point of her life".

“It is really a significant point in the time of my life as the Modi government has adopted a hatred policy and hampered the communal unity among the people due to laws like NRC and CAA. My concern is that these laws will lead to even more pressure at jobs, where will the government get more job vacancies to employ these immigrants coming from Pakistan, Bangladesh and Afghanistan when there is already a scarcity of jobs,” said the young protester Firdaus who has been actively volunteering in the demonstration.

She also raised concern over the fee hike at the premier Jawahar Lal University, which had led to major turmoil at the university. She added that her parents would not be able to afford her college fees like several other students.

“The principles of the Indian constitution lie hallow today. The government has not even once expressed condolences after the death of 23 people who were martyred in anti-CAA protests. In Assam 5 people were martyred, in Karnataka 2 people were killed, the president of India should preach to the police, as violence is taking place from their side.”

“The supreme court of India refused to put a stay on the implementation of the Act, so the court should listen and there should be no stay on our protests as well,” Khalid declared addressing about 1,000 protesters gathered in the ground.

Similar protests have sprung up in several areas of the national capital such as Nizamuddin, Old Delhi's Turkman Gate and East Delhi's Khureji.

The protest against the CAA and a suggested National Register of Citizens (NRC) have come up at Turkman Gate, a central locality of Delhi. The arrest of six persons on 16 January has only escalated the protests. Children and students were actively participating in the protest along with their mothers while chanting slogans. Even after the relentless efforts by Delhi police to prevent a re-run of the Shaheen Bagh-like protest, they continue to raise slogans against the government and CAA. As women continued to fill the tents, men stayed out in the open, separated by ropes.

Again, a Muslim dominant area in East Delhi, Khureji Khas has been holding a sit-in protest since January 13 when a group of students convinced women to step out of their houses and join the “revolutionary movement”.

“This is the first time that we are stepping out from our homes after 11 pm at night, and we have vowed to not return until the new citizenship law is rolled back,” a resident of the area said.

The protesters believe their agitation was not just against CAA and NRC but also against the low employment rates in the country, the crippling economy, rape cases, and other important issues.

The protesters across the city were drawn into the agitation, drawing inspiration from the protests at Shaheen Bagh, which has become a prime metaphor of a movement against the Narendra Modi government’s Citizenship law and NRC since 15 December.

The law was widely held as discriminatory towards Muslims and violates provisions of the Indian Constitution. Several opposition parties, civil rights activists and university students held protests across the country since December 15, 2019.  However, Prime Minister Narendra Modi and Federal Home Minister Amit Shah had tried to justify the CAA on the grounds that no Indian citizen would be affected by the new law.

the CAA, which was enacted in December 2019 provides for citizenship to Hindu, Sikhs, Christians, Buddhists and Parsis from Pakistan, Bangladesh and Afghanistan, but excludes Muslims.