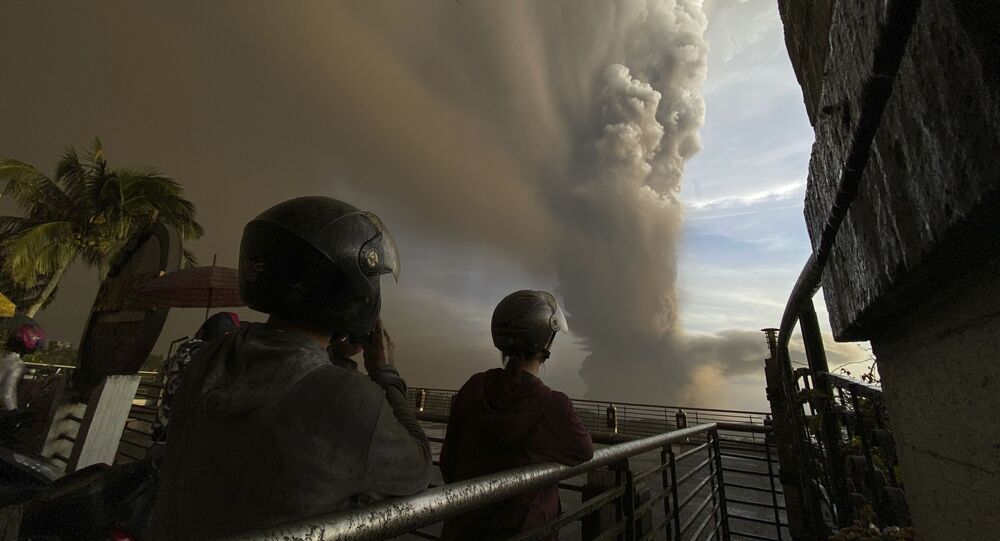 Tens of thousands of people have already been evacuated from areas adjacent to the Taal Volcano which seismologists in the Philippines said manifested “increased steaming activity in at least five spots inside the main crater”.

Renato Solidum, head of the Philippine Institute of Volcanology and Seismology (PHIVOLCS), told reporters on Monday that the ongoing magma movement inside the Taal Volcano may result in its “uplift” and potential explosive eruption.

“The increasing [volcanic] gas is an indication that definitely there is rising magma that can be a cause of possible explosion”, he said, referring to the volcano located just about 65 kilometres (40 miles) south of the capital Manila.

Solidum predicted that in case of eruption, a 3-kilometer-(1.8 mile)-high plume may led to ash falling in Cavite province and that another plume, expected to be higher than 5 kilometres (3 miles), may bring ash to the Metro Manila metropolitan area as well the provinces of Laguna, Rizal and Quezon.

On the volcano’s “uplift”, he said that it caused fissures on the ground, with Taal Lake “being stretched”.

“The land is being uplifted, water level is going down, besides the water from the main crater being vaporized”, Solidum added.

The remarks followed PHIVOLCS raising the alert level from 3 to 4, which is the second-highest warning indicating that a hazardous eruption of the Taal Volcano is possible within hours or days.

On January 12, the Philippine Taal volcano erupted in ash and magma-triggering the evacuation of many of our fellow Filipinos.https://t.co/Joi5FETiPt

This came after evacuations took place in towns of San Nicolas, Balete and Talisa in the province of Batangas, which have a combined population of more than 90,000 people.

We were able to get close to the main crater of Taal Volcano this morning and this is what we saw.

I filmed this with my iPhone. pic.twitter.com/iCYASX3F44

The Taal Volcano, which is a popular tourist spot, started spewing ash on 12 January, when PHIVOLCS reported that the volcano has manifested "increased steaming activity in at least five spots inside the main crater”.

The Philippines is situated in the seismic area known as the Ring of Fire which encircles the Pacific Ocean.