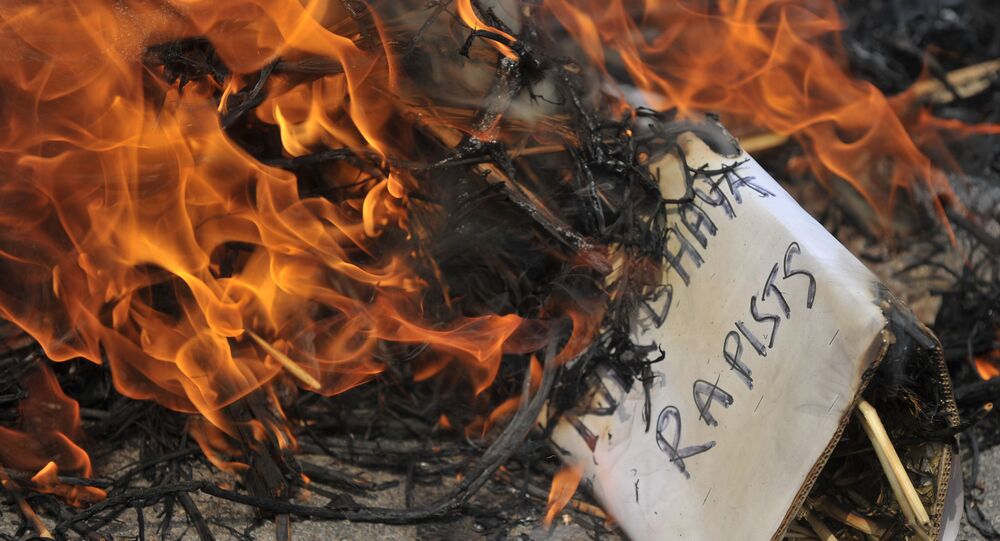 New Delhi (Sputnik): The 2012 gang rape and gruesome murder of ‘Nirbhaya’, or the "fearless" in English, in New Delhi shook the conscience of the whole country and triggered massive protests across India.

The Delhi Court on Tuesday announced that the four men convicted in the rape and murder of a 23-year-old Delhi student will be hanged on 22 January at 7 a.m (local time).

The death warrant has been issued to Mukesh Singh, who used to work as a gym instructor Vinay Sharma, who worked as a helper on a bus, Akshay Singh and Pawan Gupta who worked as a fruit-seller.

Asha Devi, the mother of 23-year-old Nirbhaya, who waited seven years for justice for her daughter, was elated after the court’s announcement on Tuesday.

"My daughter has got justice. Execution of the four convicts will empower the women of the country. This decision will strengthen the trust of people in the judicial system,” she said.

"I am happy with the court's decision. The convicts will be hanged at 7 am on 22nd January... This decision will instil fear in people who commit such crimes," Nirbhaya’s father said.

The video of Nirbhaya’s mother coming out of court after the death penalty was served to the convicts today has been shared online:

First reaction of #Nirbhaya's mother Asha Devi by my colleague @priyanktripathi. Her happiness cannot be contained. It Took 7 years, but nothing is sweeter than Justice. Its time we bring the same smile on the faces of those mothers who are still waiting justice. #NirbhayaVerdict pic.twitter.com/ccsbK70GLM

The much-awaited decision has also come as a relief to many people in the country who witnessed years of court wrangling with mercy petitions and reviews filed by each convict.

Delhi Chief Arvind Kejriwal said that the death sentence will act as a deterrent.

"We welcome the death warrant issued against the 4 convicts in the Nirbhaya case.

This will act as a deterrent" : Delhi CM @ArvindKejriwal pic.twitter.com/FMELFzDUW1

Several politicians and journalists also expressed their content with the decision on Twitter, saying that justice has finally been served.

A death warrant for the 4 convicts in the #Nirbhaya case sends across a powerful message.

An empowering moment for the women of India!#NirbhayaCase

These two.
Unimaginable loss.
Unbearable struggle and agony.
Irreparable loss.
I pray they get some sought of closure today.
Asha Devi & Badrinath Singh - more power and peace to you. #Nirbhaya #DeathWarrant pic.twitter.com/x1miOsU4ls

A section of netizens was left emotional with justice finally being served to Nirbhaya, who is often referred to as India’s daughter, while others bashed the judicial system for the years of delay in giving punishment.

#Nirbhaya tragedy has left a void in the hearts of 1.3 billion people. How many of have not welled up thinking about her story? Today’s decision can never fill that void and sadness. But it’s a satisfying small step.

As a mother, have wept over the unimaginable agony this daughter suffered.

The monsters deserved to die.

Tears of relief its finally happening.

Let other monsters not enjoy jail hospitality for so long.#Justice https://t.co/tsrWRbK29E

All four convicts in the Nirbhaya Case will be hanged on 22nd January 2020. Finally long due justice for Nirbhaya and her mother is delivered. But one question that still remains unanswered is ‘why justice is delayed so much in our country?’ #Nirbhaya

On 16 December, 2012, the paramedic student Nirbhaya was brutally gang-raped and murdered by six men in a moving bus in south Delhi, before she was thrown out. She ultimately died in a Singapore hospital, as doctors in India could not restore her perforated intestines that had been pulled out of her body.

Ram Singh, the main accused and driver of the bus hung himself in his prison cell, another minor convict who was tried in the court separately was given the maximum sentence of three years in a reform facility.