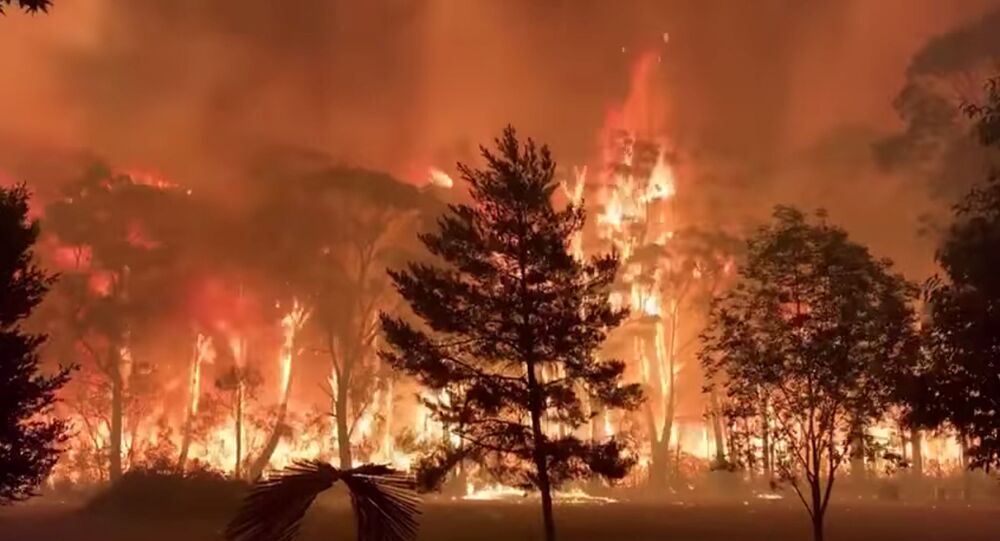 Ongoing Australian bushfires have destroyed at least 1,200 homes and scorched at least 14 million acres of land since September, with authorities fearing lightning may spark fresh blazes across Victoria as hotter temperatures lash the state over the weekend.

An ominous “devil face” image has been photographed amid the horrendous Australian bushfires as the raging flames have reportedly claimed their 20th victim.

Devil's face in Australian fire.
can you see it? pic.twitter.com/0SKtp7rXjS

​Dairy farmer Craig Calvert, who spent 13 hours fighting the flames together with his father in an attempt to save his home in East Gippsand, regional Victoria, was quoted on 3 December by the Sunrise show on 7News as saying:

"I'm not really into hokey pokey spooky stuff but there's a big devil face right in the fire".

This pic sums up the Australian fires even with a demonic face inside it. pic.twitter.com/ohUiKaUaEZ

​He also told Prime Minister Scott Morrison to "step up and get behind us, don't let any more people die".

"The Australian public is scared. It is ridiculous…Mr. Morrison, please throw your gloves on and come down here and see me," he said.

As temperatures topped 40 degrees C (104 F) across much of the state of Victoria, with strong winds fanning the flames, Prime Minister Morrison has come under serious fire over his lack of action by those affected by the raging natural calamity.

Australia’s Prime Minster has noted the extreme drought had created a “quite extraordinary’’ fire season, as he cited “a need to address issues around hazard reduction in national parks, dealing with land-clearing laws, zoning laws and planning laws around people’s properties and where they can be built in countries like Australia, up and down our coast”.

“There have been many restrictions put around those issues that now I think would have to be reviewed on the basis of the impact of the broader climatic effects we are seeing in this country,” Morrison is cited as saying by The Weekend Australian.

Authorities have called for mass evacuations of around 100,000 people in Victoria and New South Wales over fears that the raging fires will burn out of control this weekend.

New South Wales has declared a week-long state of emergency amidst the devastation, with 20 people having lost their lives due to the bushfires raging across the country since September and a further 28 people missing. Thousands of holidaymakers and residents are being urged to leave national parks and tourist areas on the south coast of New South Wales.

In Victoria, naval vessels Choules and Sycamore started evacuations of about a quarter of the 4,000 people stranded on a beach in the isolated town of Mallacoota.

This season's fires have scorched more than 5.25 million hectares (13 million acres) of bushland, with 1,365 homes destroyed in New South Wales alone, including 449 this week on the south coast.

Although bush fires are common in Australia, experts believe that arid conditions fuelled by climate change have exacerbated the blazes this year.

I don't know how I could ever begin to describe how catastrophic these fires are right now in Australia to the rest of the world...
My country is BURNING. We've seen bushfires but nothing like this.
Please spread the word, people need to know. #AustraliaOnFire #AustralianFires pic.twitter.com/xZLOSrFmJG

​In a statement released this week, ecologists at the University of Sydney estimated that nearly half a billion animals in the country have been wiped out by bushfires since September.
Despite the fact that the fires have been ongoing for months, there doesn’t appear to be an end in sight.