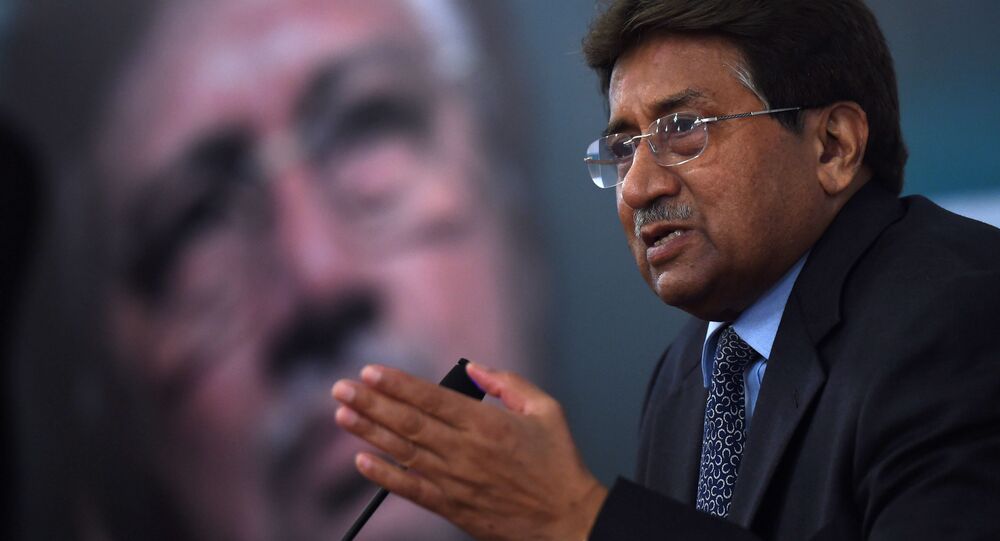 New Delhi (Sputnik): After numerous delays and much anticipation, a special court in Pakistan has announced its detailed verdict in the Pervez Musharraf treason case on Thursday. Former Pakistani leader General Pervez Musharraf was found guilty under Article 6 of the Constitution of Pakistan on 17 December.

The special court, which had found General (ret.) Pervez Musharraf guilty of treason earlier this week, issued its detailed verdict on Thursday.

The 167-page order – jointly authored by Justice Waqar Ahmad Seth of the Peshawar High Court and Justice Shahid Karim of the Lahore High Court – states that the law enforcement agencies must “strive their level best to apprehend the fugitive/convict and to ensure that the punishment is inflicted as per law and if found dead, his corpse be dragged to the D-chowk, Islamabad, Pakistan and be hanged for three days”.

Further justifying the extreme punishment, the order says "the portion of the judgment and execution of the sentence is nowhere defined but since its first impression case and the sentence is announced in his absence after declaring the convict as proclaimed offender therefore the sentence is supposed to be executed and in case of his death, a quick question would arise as the mode of executing the sentence, to this extent convict be hanged by neck till he dies."

The case was heard by a bench comprised of Justice Wagar Seth and Justice Shahid Karim, as well as Justice Nazar Akbar of the Sindh High Court.

The former Pakistan President and former army chief, after escaping the country in March 2016, has been living in self-imposed exile; he has sought medical treatment at the American Hospital in Dubai. In a video message earlier this week, he had said that the case of treason against him was baseless.

In a four-minute video from the hospital bed, Musharraf said: “There is no example in history like the decision on Article 6 case that the defendant or his counsel has been denied permission to have their say. I had said that a special commission should take my statement. It was ignored. I call this decision baseless because due court procedure has not been followed in this case. Also, as per the constitution, it was not important to take up this case. Some people are taking undue advantage of their positions to conspire against me.”

In November, a special court in Pakistan’s capital city of Islamabad had reserved its verdict in the treason case. However, the Islamabad High Court had halted the decision of the special court to announce its judgement.

The High Court order had come on a petition filed by the interior ministry, which had requested it to set aside the special court's decision to announce its judgement in the treason case. The federal government was directed to appoint a new prosecutor to the case by 5 December.

On 17 December, the special court handed down the sentence after analysing complaints, records, arguments and facts in the case for three months.

The case against the former military chief was filed by the previous Pakistan Muslim League–Nawaz (PML-N) government in late 2013 for subverting the Pakistan Constitution and imposing a state of emergency on 3 November, 2007.

Musharraf seized power from then-Prime Minister Nawaz Sharif through a military coup on 12 October 1999, when the latter was reportedly about to sack him from the post of the army chief.

Musharraf led a military-dominated government as army chief until 2007. He nominated himself as Pakistan’s 10th president on 20 June 2001, and secured himself in that position till 18 August 2008, through a controversial referendum held on 1 May 2002.

He was forced out of office and threatened with impeachment. Musharraf became Pakistan’s first army chief and president to be charged with treason on 31 March 2014, for imposing a state of emergency, in a bid to end challenges to his rule by a hostile judiciary, Islamist militants and political rivals.

The former President pleaded not guilty to five charges and dismissed them as being politically motivated. The trial, however, could not be concluded over the past six years for several reasons.

Punishment under Article 6 of Pakistan Constitution

The second clause adds that any person aiding, abetting or collaborating in the acts will also be considered guilty of high treason.

The clause 2A says that an act of high treason cannot be validated by any court, including the Supreme Court and a High Court.

The last clause directs the Parliament to provide “for the punishment of persons found guilty of high treason.