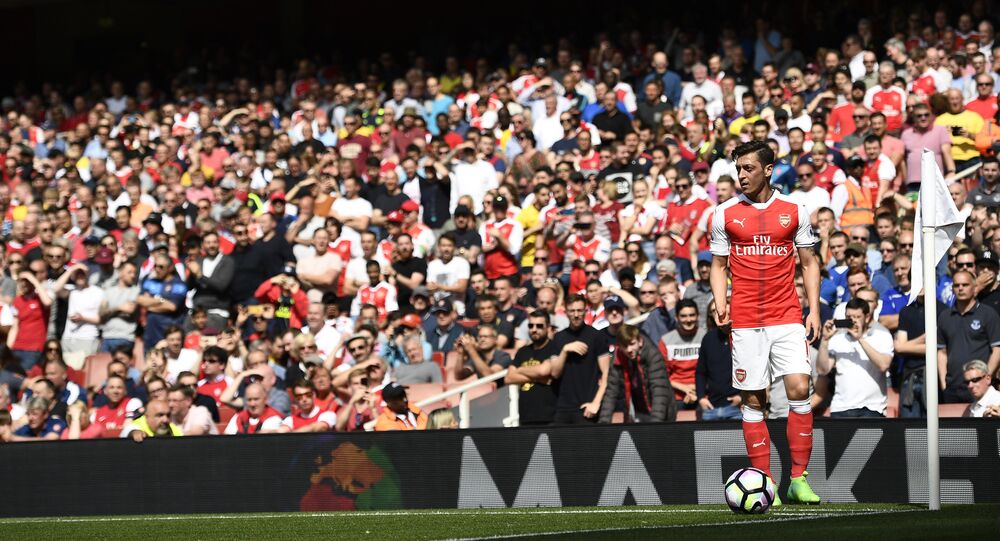 Chinese state broadcaster CCTV pulled its coverage over the weekend for the Sunday football match between Arsenal and Manchester City after Mesut Özil, the Gunners’ 31-year-old midfielder, took to social media to criticize China’s treatment of the Uighur Muslim community in the region of Xinjiang.

Rather than airing the match, which ended with Manchester City winning 3-0, the broadcaster pulled the coverage on Saturday and filled the time slot come Sunday with an earlier recording of Tottenham Hotspur’s 2-1 victory over the Wolverhampton Wanderers.

State media outlet the Global Times noted in a Sunday piece that the football event would not be broadcast to Chinese fans on CCTV5 or on PPTV, a Chinese video streaming website, as a result of Özil’s Friday social media post which made “false comments on Xinjiang affairs.”

In the post, Özil, who is ethnically Turkish and a follower of the Muslim faith, criticized both China’s treatment of the Uighurs and the lack of reaction to the events from the Muslim community as a whole, noting that Uighurs are “warriors who resist persecution.”

“[In China] Qurans are burned, mosques were closed down, Islamic theological schools, madrasas were banned, religious scholars were killed one by one,” reads a Guardian translation of the post. “Despite all this, Muslims stay quiet.”

Aside from the text, the social media post also included a background image of the flag of East Turkestan, a banner widely adopted by Uighur independence supporters.

Wang Yi, China’s foreign minister, remarked on the weekend’s developments Monday, telling the Times that Özil has “been deceived by fake news about Xinjiang,” and that he is more than welcome to visit the autonomous region should he choose to take the invitation.

“As long as he exercises conscience and neutrality, he will find a Xinjiang that is different from what he thinks,” Wang added.

As for the Arsenal team as a whole, it has not managed to successfully distance itself from the controversy. Although the Islington club made clear in a statement that it was “always apolitical as an organization,” hundreds of fans have called on the club to release the German-born player.

Freddie Ljungberg, the interim Arsenal manager, told the Associated Press that the matter would ultimately be dealt with by upper management. “The China thing is political, and I’ll leave that to the club,” he said.

Over the years, Beijing has repeatedly rejected accusations that it has discriminated against and placed members of the Uighur community in re-education camps, stressing instead that Muslims in the region are attending vocational colleges established as part of the government’s counterterrorism efforts.

This latest development comes months after Houston Rockets General Manager Daryl Morey landed in a firestorm after he sent off a tweet in support of the anti-government protests in Hong Kong. Morey’s since-deleted tweet read: “Fight for Freedom. Stand with Hong Kong.”

Following the October post, the NBA team’s general manager found himself denounced by several Chinese government officials and Tilman Fertitta, the owner of the Rockets. Despite an apology from Morey, the Chinese Basketball Association announced that it would be cutting ties with the Houston team.