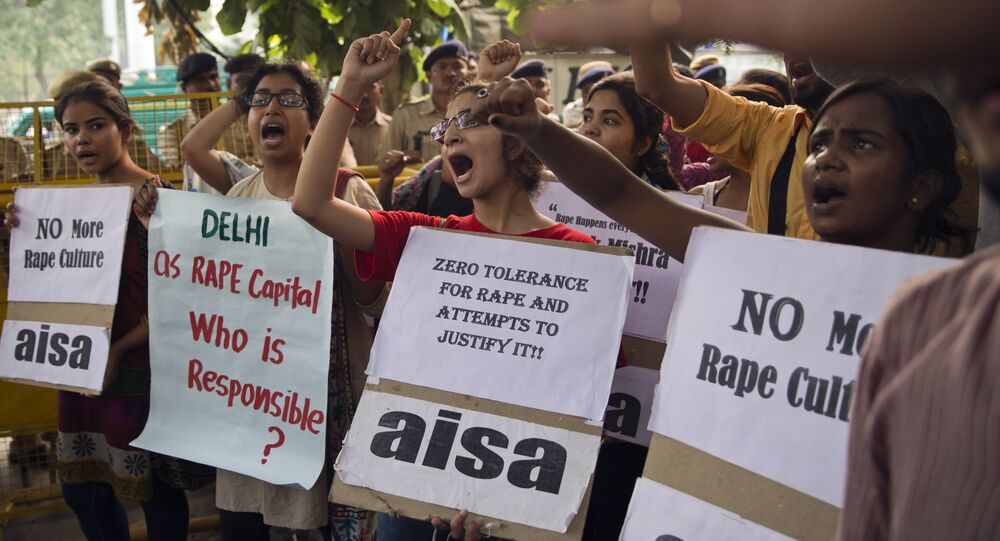 New Delhi (Sputnik): Back in 2014, then-opposition party leader Narendra Modi called New Delhi India's “Rape Capital” during an election campaign and blamed the then-ruling Indian National Congress for inefficiency in dealing with the rise in crimes.

The Chief of India’s national capital Arvind Kejriwal announced on Friday that his government would administer a pledge to schoolboys to behave well with girls and not indulge in crimes against woman.

Kejriwal also suggested that mothers and sisters should educate boys in their house and disown them if they commit crimes against women.

"We need to build a moral pressure on boys that we will not tolerate this behaviour. All the girls will also be asked to talk to their brothers, to tell them that he cannot ever misbehave with any girl."- @ArvindKejriwal pic.twitter.com/Xv3THjhP1F

Delhi's move comes in the wake of a series of barbs between the ruling Bharatiya Janata Party and the opposition Indian National Congress due to former Congress leader Rahul Gandhi’s ‘Rape in India’ remark.

Gandhi hit back at Prime Minister Narendra Modi for his ‘Rape Capital’ remark during an election rally in 2014 and demanded an apology from him.

1. For burning the North East.

3. For this speech, a clip of which I'm attaching. pic.twitter.com/KgPU8dpmrE

Gandhi accused the Modi government of changing its policy from “Make in India” to “Rape in India” during an election in the eastern Jharkhand on Thursday.

The statement led to outrage in parliament and subsequent adjournment of the ongoing session. Union Minister Smriti Irani lashed out at Gandhi and said: “Rahul Gandhi should listen carefully. A reply to his 'Come Rape in India' invitation would be given by families of India."

Irani ended up becoming centre of trolling as netizens mocked her for twisting Gandhi’s statement of “Rape in India” to 'Come rape in India'. It also led to hashtag #ShamelessSmriti to trend in twitter.

Hey @smritiirani this was when @narendramodi not just called Delhi the "Rape Capital" but also shamelessly begged for votes in the name of Nirbhaya rape case.

Just saw #SmritiIrani lead offensive against #RahulGandhi. The whole BJP party has absolutely crafted the art of diverting from real issues. She really went on offensive because she thought by Rape In India he meant "come and rape in India"?

Others took on Irani with memes; some even reminding her of her own party leaders facing alleged rape charges.

​The development comes amid several incidents of rape and murder in the country, which caused protests across India, as people demanded justice for the families of victims.

Accused Threatens Rape Survivor with Repercussions Worse than in Unnao Gang-Rape, if She Testifies