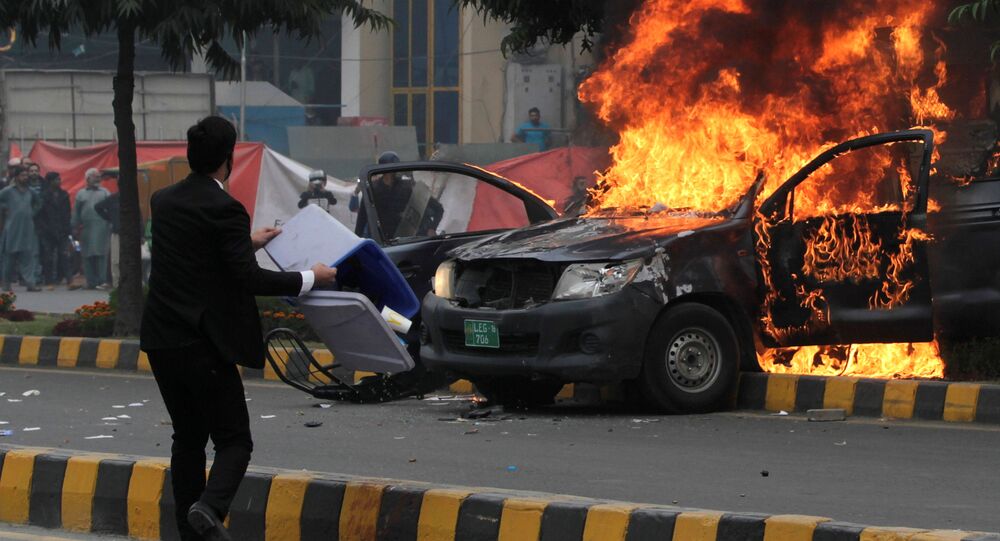 Pakistan Lawyers on Countrywide Strike After Clashes with Doctors - Reports

New Delhi (Sputnik): Pakistan police pressed charges against 200-250 lawyers and about 20 were arrested after hundreds of them barged into the cardiology hospital in the eastern city of Lahore on 11 December and attacked doctors, according to the hospital's complaint.

Lawyers across Pakistan boycotted courts on Friday in protest against the arrest of their colleagues, who were taken into custody after riots broke-out at the Punjab Institute of Cardiology (PIC) in Lahore, according to Dawn media reports.

Lawyers were demanding the immediate release of the arrested colleagues and the scrapping of charges filed against them under the Anti-Terrorism Act.

Video footage shows lawyers calling for a boycott against the alleged bias and ill-treatment of government and police.

The arrested lawyers were taken amid tight security with their faces covered.

Another video showed lawyers protesting against doctors over the incident and threatening them against entering Pasrur city.

Four patients died at the cardiology hospital on 11 December which was allegedly ransacked by lawyers, hampering the treatment of patients in critical condtion.

Videos surfaced online, showing alleged lawyers vandalising hospital property, attacking staff and damaging cars parked around the hospital. The vehicles were also burnt down during the clashes and gunshots were fired in the air by lawyers.

As student of law, It was very hurtful to see the unlawful and shameful activities of lawyer's community in the Lahore incident...

Wow what a proud moment pic.twitter.com/ZcfKFDyFKI

Simmering Tensions between Lawyers and Doctors

According to ‘The News’ website of Pakistan, tensions between the two erupted on 24 November when a lawyer's mother was admitted to PIC, where a scuffle broke out with the hospital staff and doctor.

The fresh clashes of 11 December were the result of a viral video, in which a young doctor is mocked by lawyers.

This is the root cause of today's incident at PIC#PICunderattack pic.twitter.com/XlzUXowlcH