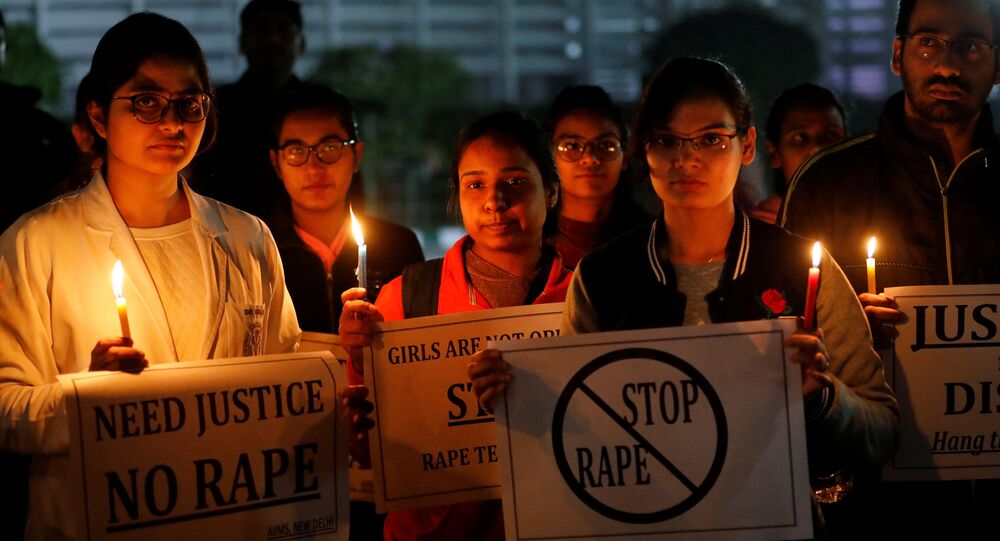 New Delhi (Sputnik): Rahul Gandhi, a lawmaker of India’s main opposition party Congress and son of former Prime Minister Rajiv Gandhi, refused on Friday to apologise for his controversial "Rape in India" comment, claiming that in every state of the country administered by the ruling BJP incidents of rape were being reported frequently.

The Indian Parliament’s month-long Winter Session was adjourned on Friday amid a row over a controversial remark by Rahul Gandhi, a lawmaker and former chief of India’s main opposition Congress, who accused the Modi government of changing its policy from “Make in India” to “Rape in India”.

"Narendra Modi had said 'Make in India' but nowadays wherever you look, it is 'Rape in India'…”, Gandhi, a former president of the Congress party, controversially said at an election-related rally in Jharkhand state on Thursday.

He added: "Narendra Modi says 'Beti Bachao, Beti Padhao' (Save Your Daughters, Educate Your Daughters), but he never tells you from whom should the daughters be saved?”

On Friday, lawmakers from India’s ruling Bharatiya Janata Party (BJP) and the opposition Congress traded charges against each other in Parliament.

The remark prompted a strong objection by lawmakers from the ruling Bharatiya Janata Party (BJP) and a demand for an apology from Rahul Gandhi. The party accused him of insulting Indian women.

In parliament’s Lower House (Lok Sabha), Textile Minister and BJP lawmaker Smriti Irani, criticising Gandhi, said: “It’s happened for the first time in the history of India that a Gandhi family's son is saying 'come and rape women in India'".

“Rahul Gandhi should be punished for politically using women," she demanded.

Another lawmaker Kanimozhi, a politician from the Indian state of Tamil Nadu, defended Gandhi, saying that the Congress politician was only flagging his concern over the growing incidents of rape in India.

"The PM has always been saying it has to be Make in India so that India flourishes… what Rahul Gandhi said was that situation in India has changed," she added.

In the Upper House of Parliament, several lawmakers complained about Gandhi’s remark while refusing to heed the chair’s caution that taking the name of a person who was not a member of the House was against the rules.

Earlier on Friday, Adhir Ranjan Chowdhury, Leader of main opposition party Congress in the Lok Sabha, raised the recent rape and murder of a 23-year-old woman in Uttar Pradesh.

Incidents of rape and murder have led to unprecedented protests across India of late, but have been most visible in New Delhi.

Last week, people took part in a candlelit march in New Delhi to demand justice for the families of rape victims from Hyderabad (Telangana state) and Unnao (Uttar Pradesh state).