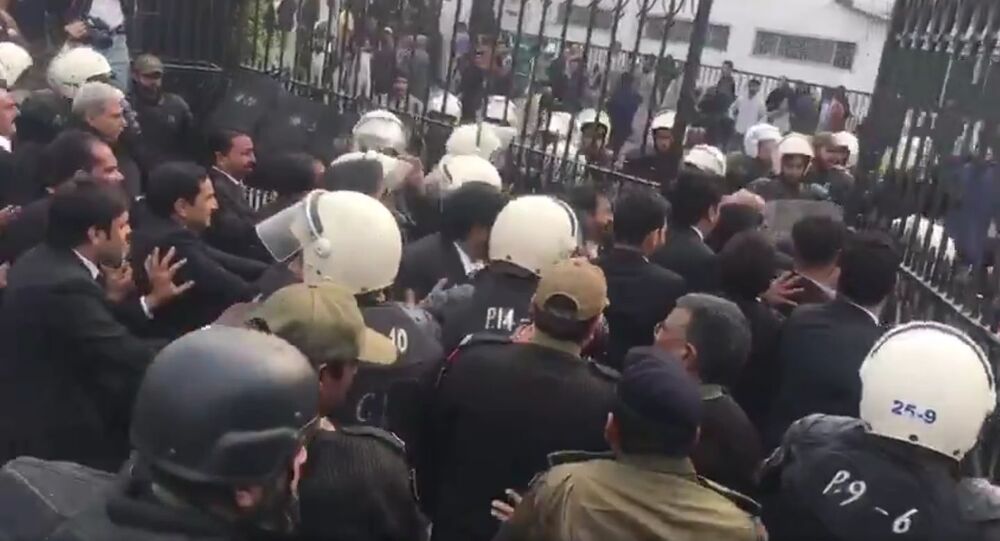 New Delhi (Sputnik): Four patients died in a hospital in Lahore city of Pakistan on Wednesday after lawyers barged into the emergency ward. The patients were in critical condition and were left unattended.

Several lawyers holding batons forced open the gates of the Punjab Institute of Cardiology (PIC) in Lahore and shuttered the entry and exit points of the hospital. Police had to lob teargas shells and baton-charge to disperse them.

In the videos surfacing on social media from Pakistan, lawyers could be seen barging into the hospital gates and attacking doctors.

According to media reports, the lawyers were protesting against a viral video in which a doctor alleged that lawyers were putting pressure on police to take him into custody for not providing a lawyer with priority treatment.

The video in question shows the doctor, a member of Young Doctors’ Association, saying that a group of lawyers were forcing police to press charges against him under Section 7 of the Anti-Terrorism Act, 1997. However, when the police refused, the lawyers urged the police to file some case to “save face”. The video was seen as an insult by lawyers.

In another video, Information Minister of Punjab Fayyazul Hasan Chauhan can be seen getting heckled by the protesting lawyers. He alleged that the lawyers tried to kidnap him.

Several injured in clashes between lawyers and doctors at the Punjab Institute of Cardiology in Lahore. Provincial minister
Fayazul Hassan Chohan also beaten up. pic.twitter.com/YlR7G8Jo9j

Aftermath of the attack on Punjab Institute of Cardiology. Health facilities destroyed in a clash between lawyers and doctors. Why are lawyers, torchbearers of resistance to Musharraf's regime, behaving like thugs? Men of noble professions not inspiring any respect with this act pic.twitter.com/mOAk7WzNSY

Time to reflect who has promoted culture of abuse and violence in Pakistan. pic.twitter.com/XZPqKBGJlY

In another video, a man could be heard saying that his mother had died due to violent clashes and the lack of availability of doctors in the emergency ward.

Shattered to the core ! He lost his mother due to terrorist attack on Punjab Institute of cardiology by #Lawyers Goons.
Mr Imran Khan ! isn’t it high time to screw the hell out of these terrorists lawyers??#Lahore #PICUnderAttack #Shame
pic.twitter.com/MV8tgS8JRw

Several cars parked near the hospital were also torched or damaged during the clashes.

Punjab State Chief Sardar Usman Ahmad Khan Buzda has ordered an investigation into the matter and asked for an inquiry report from police and the provincial secretary of specialised health and medical education.

Meanwhile, a doctors’ professional organisation has called for a strike across Punjab following the incident and threatened to strike, vowing that none of them would attend patients across Punjab.