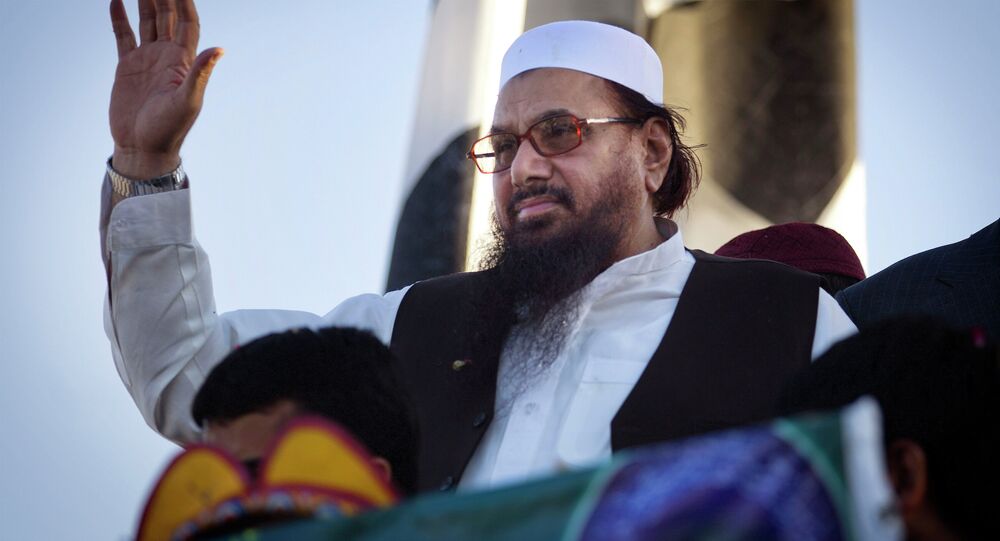 New Delhi (Sputnik): The court had delayed the indictment on Saturday, due to the unavailability of one of the suspects in the case registered by the Counter-Terrorism Department (CTD) on charges of terror financing, Pakistan news daily the Dawn reported.

An anti-terrorism court in the city of Lahore in Pakistan's Punjab province has indicted Hafiz Saeed, founder of the terror group Jammat-ud-Dawah and Lashkar-e-Taiba, who was detained in July for offences pertaining to terror financing.

The Counter-Terrorism Department (CTD) in Pakistan's Punjab province has registered 23 cases against Saeed and his accomplices under the Anti-Terrorism Act (ATA), 1997, on alleged charges of terror financing in different cities of the region.

The Jammat-ud-Dawah (JuD) chief has been in prison since 17 July 2019. Saeed is accused of being the mastermind behind the 2008 Mumbai attacks, in which 160 people had died following a four-day siege by the terrorists.

The Counter-Terrorism Department (CTD) of Pakistan registered cases in five cities of Punjab, alleging that the terror group was being financed with funds collected through non-profit organisations and trusts including Al-Anfaal Trust, Dawatul Irshad Trust, Muaz Bin Jabal Trust, etc.

These non-profit organisations were banned in April when the CTD, during detailed investigations, found that they had links with the terror group and its top leadership.

The Pakistani government is under pressure from the international community to investigate the activities of both the LeT and the JuD, besides the latter's charity wing – the Falah-e-Insaniat Foundation (FIF).

The US Treasury Department has classified Saeed as a Specially Designated Global Terrorist. Washington has offered a $10 million reward for anyone providing information that helps bring the JuD chief to justice.

In 2008, the Indian business capital Mumbai was shaken by multiple terrorist attacks that occurred on 26 November and were perpetrated by ten gunmen allegedly connected to Lashkar-e-Taiba, a Pakistan-based terrorist organisation. The attack continued for four days, leaving 164 people killed and over 300 injured, including security personnel and foreigners.