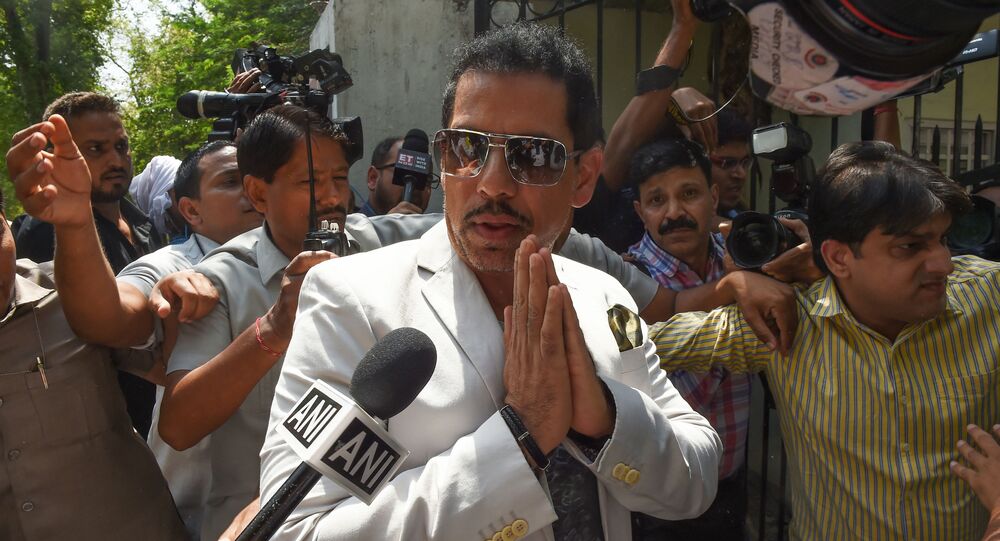 New Delhi (Sputnik): The Enforcement Directorate (ED), India’s top economic intelligence agency, is investigating Robert Vadra under the Prevention of Money Laundering Act as he is suspected of laundering £1.9 million pounds. A lawyer representing Vadra told the court that his client wants to travel to Spain for two weeks.

Facing a probe over allegations of money laundering did not stop Robert Vadra, the son-in-law of Sonia Gandhi, chief of India's opposition Congress party, from seeking permission from a Delhi court on Saturday to travel abroad for medical treatment and business.

The Enforcement Directorate, however, sought more time from the court to file a response. Special Judge Arvind Kumar then directed it to file its reply by 9 December.

Saturday’s request to travel abroad comes six months after a court allowed Vadra to travel to the US and the Netherlands for six weeks for a health check up, but denied him permission to visit the UK.

The Enforcement Directorate has repeatedly expressed its apprehension in court that Vadra may destroy evidence if allowed to go to the UK.

Vadra has been accused of using his various properties and real estate holdings both at home and abroad, especially in London and the UAE, for "routing kickbacks" and "round-tripping illegal wealth".

Media reports have quoted the ED as claiming in its legal arguments that the properties in London and the UAE were bought with money of suspect companies, some of which are owned by Vadra’s close associates - arms dealer Sanjay Bhandari and UAE-based businessman C C Thampi.

The ED is separately probing both Bhandari and Thampi for allegedly violating the country’s Foreign Exchange Management Act (FEMA), 1999.

Last year, enforcement agencies filed a money laundering case against Vadra for the purchase of a £1.9 million property at Bryanston Square in London and two other properties with an estimated worth of £4 million and £5 million.

In September last year, a case was filed against Vadra and former chief of India's Haryana B. S. Hooda under the Prevention of Corruption Act and the Indian Penal Code (IPC) for allegedly purchasing land in various places in the state’s Gurgaon district and selling them at rates higher than prevailing market prices.

In 2015, the ED registered a money laundering case against Vadra-owned Sky Light Hospitality for buying land in Rajasthan at cheap prices and allegedly selling them for Rupees 51.5 million (over $702,000) to Allengenery Finlease, a fictitious company with no real business activity.

There are also 18 cases of fraud against companies in which Vadra allegedly has a stake.

All of these properties were allegedly bought between 2005 and 2010, according to the ED.

In April this year, Vadra was directed to not leave the country without the court’s prior permission after being granted conditional anticipatory bail.