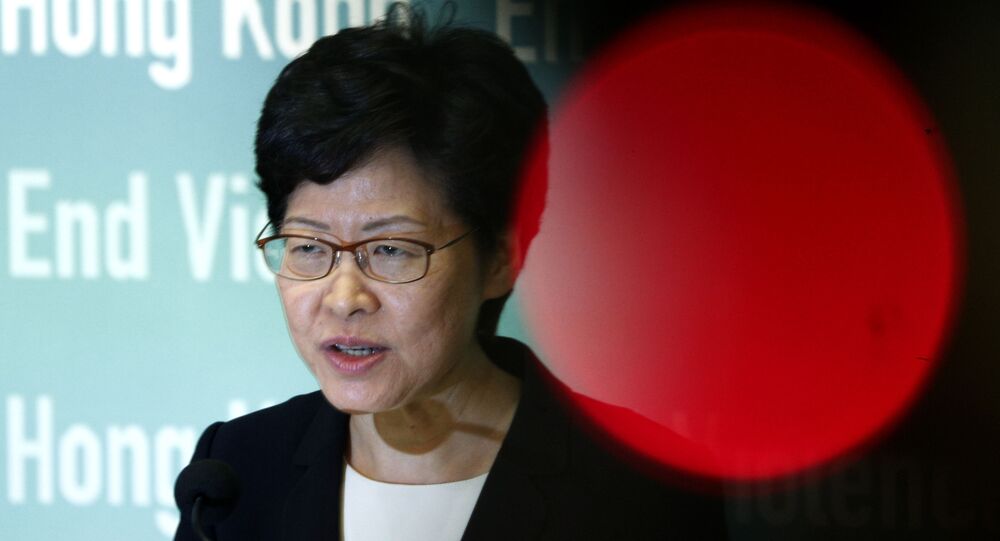 BEIJING (Sputnik) - Last week, US President Donald Trump signed the Hong Kong Human Rights and Democracy Act, which allows for sanctions on human rights offenders in China's special administrative region and could result in the US revoking the special trading status of the territory.

Hong Kong Chief Executive Carrie Lam on Tuesday hit out against a newly signed United States law on sanctions and trade relations as they pertain to the special administrative region, calling it detrimental to the local business environment.

"The exact consequences of the legislation on Hong Kong depend on what the US authorities will do after the annual review of the situation in the area, and this uncertainty creates an unstable environment in Hong Kong’s special administrative area, which has affected business confidence, because companies are worried about what kind of actions Washington will take," Lam was quoted as saying by the Hong Kong broadcaster RTHK.

Furthermore, the chief executive said she saw no need or justification for the law as human rights and freedoms were guaranteed in Hong Kong’s Basic Law.

Speaking before a weekly meeting with the Executive Council, Hong Kong’s cabinet of ministers, Lam noted that Hongkongers enjoy freedom of the press, assembly and religious practice.

Hong Kong has been gripped by violent protests since June. The demonstrations, initially a response to an extradition bill, continued even after the highly unpopular measure was withdrawn in October. The protesters now claim that the authorities are abusing their power to suppress them, a claim that the government has denied.